Think over consequences on future developments: N Korea warns US over ship seizure

The cargo ship was detained in Indonesian waters in April 2018. Its seizure was announced by US Justice Dept on May 9, 2019. 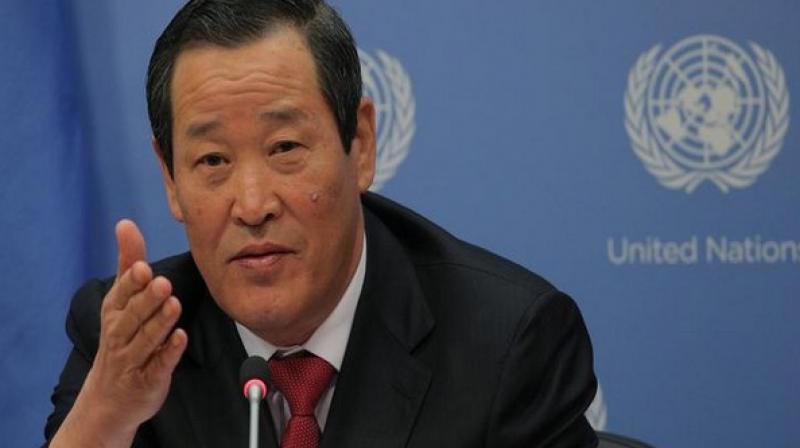 'The United States should deliberate and think over the consequences its outrageous acts might have on the future development,' Kim was quoted as saying. (Photo: ANI)

Washington: North Korea on Tuesday warned the United States that its "outrageous" seizure of a cargo ship could have consequences on the future of US-North Korean relations.

Permanent Representative of the Democratic People's Republic of Korea (DPRK) to the United Nations, Kim Song, reiterated a demand for the immediate return of the vessel and said that Pyongyang was closely monitoring Washington's "every move" which aims at bringing maximum pressure on the North to make it "kneel down", Al Jazeera reported.

"The United States should deliberate and think over the consequences its outrageous acts might have on the future development," Kim was quoted as saying.

On May 9, the United States "committed an unlawful and outrageous act" of dispossessing DPRK's cargo ship Wise Honest by forcibly taking it to American Samoa under the pretext of unilateral sanctions and violation of the US domestic law, Song told reporters at the UN headquarters in New York.

The cargo ship was detained in Indonesian waters in April 2018. Its seizure was announced by the US Justice Department on May 9, 2019, for allegedly violating the US and UN sanctions.

In addition, Song described the seizure as "outright denial of the underlying spirit" of a joint statement by President Donald Trump and North Korean leader Kim Jong Un after their first summit in Singapore last year "which committed to establishing new bilateral relations".

He also noted that the seizure was the "product of an extreme hostile policy of the United States against the DPRK." He accused the US of violating international law and the 2004 UN Convention on Jurisdictional Immunities of States and Their Property.

The Wise Honest is a state-owned ship and a property of the DPRK, he said. "We regard it as a part of our territory where our sovereignty is fully exercised," Xinhua quoted Song as saying.

Last week, Song, in a letter, had urged UN Secretary-General Antonio Guterres to take "urgent measures" to contribute to stability on the Korean Peninsula.