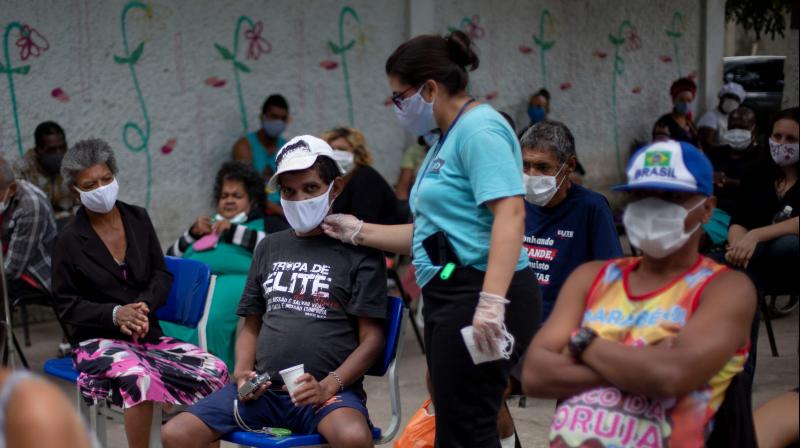 A caretaker fix the face mask of a resident of the public shelter Stella Maris as they wait seated respecting social distance while Brazil's Armed Forces soldiers disinfect the place. (AFP)

Rio De Janeiro: More young people are dying of COVID-19 in Brazil than other countries, a trend driven partly by demographics -- the overall population is younger -- but also by poverty and the need to work.

The South American giant of 210 million people is the latest flashpoint in the coronavirus pandemic, rapidly rising to third this week on the list of countries with the most infections.

With more than 310,000 cases, it lags behind only the United States and Russia.

A closer look at the data raises questions about the widely held idea that COVID-19 is mainly dangerous for the elderly.

Of Brazil's victims, 69 percent were aged 60 or older, compared with 95 percent in Spain and Italy, according to official statistics.

The disparity is partly driven by the age of the overall populace: Just 13.6 percent of Brazil's population is 60 or older, compared to 25 percent in Spain and 28 percent in Italy.

But demographics do not tell the whole story.

"Since Brazil has a younger population, it's normal for the number of cases to be higher among under-60s. But it's also because young adults are observing stay-at-home measures less," said Mauro Sanchez, an epidemiologist at the University of Brasilia.

"Young (Brazilians) aren't responding to the virus differently. It's because they're more exposed," he told reporters.

"What's perverse is that a lot of the people who are exposing themselves to the virus are doing it because they don't have a choice."

The phenomenon has become more pronounced as the pandemic progresses here.

In early April, 19 percent of COVID-19 deaths in Brazil were among under-60s. This week, that figure rose to 31 percent.

Some experts pin the blame for that on disjointed government policies: Stay-at-home measures are decided at the state and local level, but at the federal level, far-right president Jair Bolsonaro regularly rails against them.

Bolsonaro, who has famously compared the coronavirus to a "little flu," says business closures are needlessly hurting the economy, which is facing a deep recession this year.

He has urged Brazilians to get back to work.

But the working-age population is vulnerable to the disease, too.

Brazil's official statistics do not break down coronavirus infections by age, and experts say under-testing means the real number of cases is probably far higher than the health ministry's figures.

A group of researchers called COVID-19 Brasil estimates the country has more than 3.6 million infected people -- more than 10 times higher than the official figure.

"The statistics are worrying, because we can see that lately young people are not taking the necessary precautions," said Patricia Canto, a pulmonologist at the National School of Public Health.

In a country where 20 percent of the population lives on less than $5.50 a day, many Brazilians are forced to choose between staying home and putting food on the table.

The poorest tend to work in the informal sector -- things like cleaning, cooking, childcare and other jobs that can only be done by leaving the house.

The government has allocated emergency payments of 600 reals (about $110) a month to help such workers get by.

But many have had trouble registering. In a case of social distancing policy gone awry, crowds have thronged branches of state bank Caixa as people wait hours to sign up for the benefit.

The poor also tend to have a higher risk of underlying conditions that can make COVID-19 more severe.

"The low-income population often has major risk factors, such as obesity, diabetes and high blood pressure. Many don't have access to a nutritious diet," said infectious disease specialist Julio Croda.

He resigned from a high-level post in the health ministry in March over disagreements with government policies.

Bolsonaro "is defending viewpoints that have no technical or scientific basis," he said.

"And that's putting the population at risk."