About three hours after he took hostages in the store, the suspect surrendered. 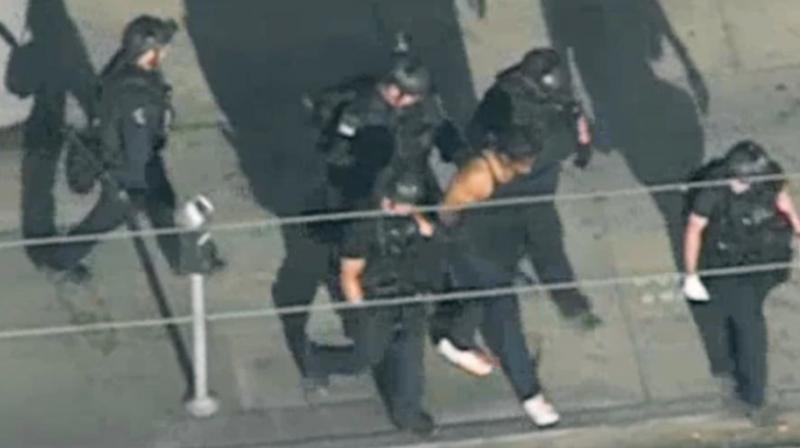 In this image from video provided by KNBC-TV, police officers escort a suspect away from a Trader Joe's supermarket in the Silver Lake district of Los Angeles on Saturday after a more than three hour standoff.(Photo: AP)

Los Angeles: A man shot his grandmother and girlfriend Saturday and then led police on a car chase that ended when he crashed into a pole and ran inside a busy supermarket as bullets from officers shattered the front doors. About three hours after he took hostages in the store, the suspect surrendered.

One woman was killed inside the supermarket, Los Angeles Mayor Eric Garcetti said.

Officers with riot gear, armed with rifles, stood along the side of the Trader Joe’s in the Silver Lake area on Saturday afternoon and used mirrors to try to look inside as hostages periodically came out the front door with the hands raised. At least one person was injured but expected to survive.

The suspect walked out with a cluster of four hostages and appeared to be already handcuffed as the group emerged through the front door. Police immediately surrounded the suspect, searched him and then brought him to a waiting ambulance. The man appeared to have blood on his left arm.

Investigators believe the suspect, whose name hasn’t been released, had shot his grandmother and girlfriend around 1:30 pm in South Los Angeles and then fled in a 2015 Toyota Camry, Sgt. Barry Montgomery, a Los Angeles police spokesman, said.

Officers spotted the suspect’s car near Hollywood and tried to pull him over, but the man refused to stop and led officers on a pursuit, he said. During the chase, the suspect shot “multiple rounds” at officers, though no officers were struck by the gunfire, he said. 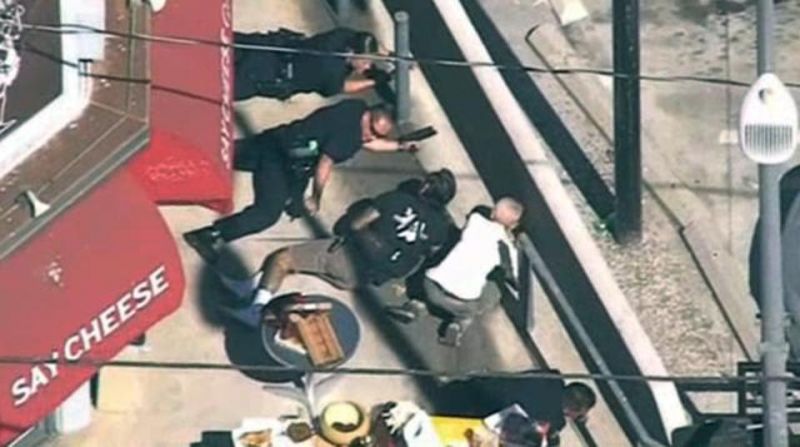 In this image from video provided by KNBC-TV, police and civilians take cover near the Trader Joe's supermarket. (Photo: AP)

At least one officer is believed to have returned fire, Montgomery said.

The suspect eventually crashed his car outside of the Trader Joe’s supermarket and then ran into the store. An Associated Press employee who lives in the area reported seeing a car crashed into a utility pole outside the store.

Don Kohles, 91, was walking into the supermarket when he saw a car being chased police crash into a pole just outside. Police fired at the driver, shattering the store’s glass doors and Kohles and others inside took cover and laid on the floor as the suspect ran into the store, he said.

He could hear others around him sobbing as the man ran toward the back of the store and yell at people, but Kohles said he never heard any more gunshots. After about 30 minutes, police came inside and rushed some of the customers out, he said.

People frantically tried to flee from the store and some were seen climbing through windows, jumping down about 8 feet, and others darted through the back door. 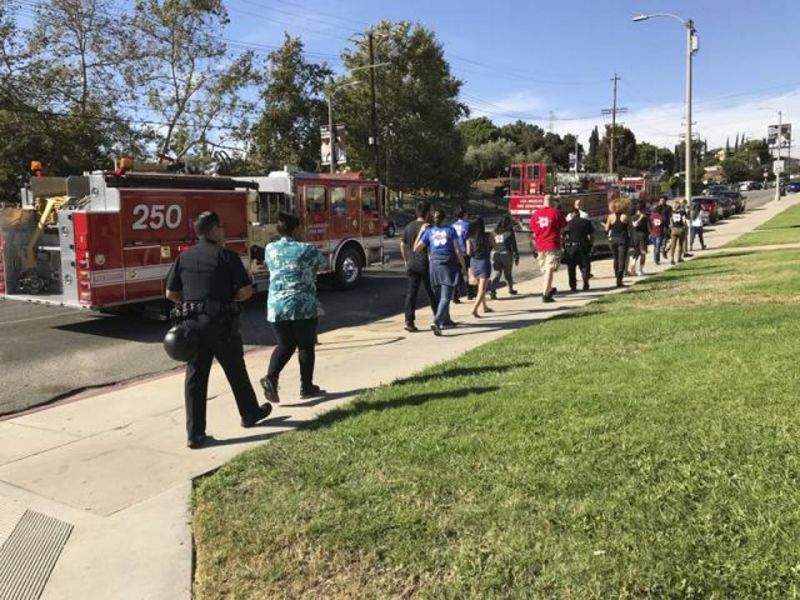 Christian Dunlop, a real estate agent and actor who lives nearby, said he was watching from the corner when he saw four people flee out the front of the store. An employee was dragging an injured woman by the hands out the front door, he said.

One woman who was injured was taken to the hospital in stable condition, according to David Ortiz, a fire department spokesman, though it was unclear how she was injured. Officials said they had 18 ambulances and 100 firefighters staged at the scene.