Many of the fires were sparked by lightning strikes, nearly 12,000 of them caused by brief thunderstorms since last weekend 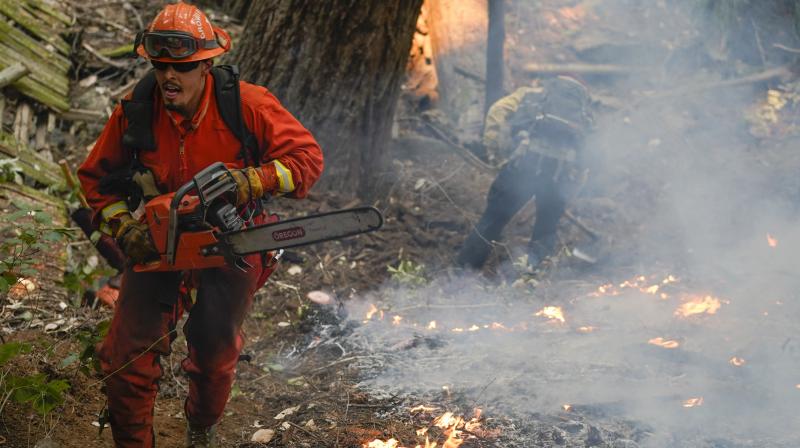 A member of a California Dept. of Corrections fire crew runs along a containment line with a chainsaw while fighting the CZU August Lightning Complex Fire. (AP)

Santa Cruz: Sky-darkening wildfires that took at least six lives and forced tens of thousands of people from their homes blazed throughout California on Friday as firefighting resources strained under the vastness of the infernos authorities were trying to control.

Crews from Oregon, Idaho and Arizona have arrived to relieve local firefighters, he said, with engines on their way from as far away as Maryland and New Jersey.

Tens of thousands of homes were threatened by flames that drove through dense and bone-dry trees and brush. Many of the fires were sparked by lightning strikes from brief thunderstorms, nearly 12,000 since last weekend as a high-pressure area over the West brought a dangerous mix of triple-digit weather and monsoonal moisture pulled from the south.

Some fires doubled in size within 24 hours, fire officials said.

And while some evacuations were lifted in the small city of Vacaville, between San Francisco and Sacramento, other areas expanded their evacuation areas. The University of California, Santa Cruz, was evacuated, and a new fire burning near Yosemite National Park also prompted evacuations.

Santa Cruz itself, a coastal city of 65,000, wasn't affected. But Mayor Justin Cummings urged residents Thursday evening to be prepared to evacuate by gassing up their vehicles and packing important documents, medicines and other belongings.

More than 64,000 people have been ordered to evacuate in San Mateo and Santa Cruz counties, which make up part of Silicon Valley and hug the coast south of San Francisco.

The ferocity of the fires was astonishing so early in the fire season, which historically has seen the largest and deadliest blazes when gusty, dry winds blow in the fall.

But the death toll already had reached at least six since the majority of blazes started less than a week ago, with four deaths claimed by fires burning in wine country north of San Francisco.

The bodies of three people were found in a home that burned in Napa, Henry Wofford, spokesman for the Napa County Sheriff's Office, told the San Francisco Chronicle. In Solano County Sheriff Thomas A. Ferrara reported the death of a male resident there.

Separately, a Pacific Gas & Electric utility worker was found dead Wednesday in a vehicle in the Vacaville area Wednesday. In central California, a pilot on a water-dropping mission in western Fresno County died Wednesday morning when his helicopter crashed.

At least two other people were missing and more than 30 civilians and firefighters have been injured, authorities said.

Smoke and ash billowing from the fires also fouled the air throughout California's scenic central coast and in San Francisco. The fires have destroyed at least 175 buildings.

Tim and Anne Roberts had gone to the beach with their two children on Monday to avoid the smoke at their home in Boulder Creek in Santa Cruz County. They packed a change of clothes, their children's school supplies and their passports  just in case.

The good news for Brookdale resident Larissa Eisenstein Thursday afternoon was that her five chickens, Kelly and The Nuggets, had been safely relocated into a stranger's yard in a safer, neighbouring community.