Donald Trump to celebrate Diwali at White House on Thursday

According to the White House, Trump will participate in the Diwali celebrations by lighting a ceremonial 'diya' (lamp) on Thursday. 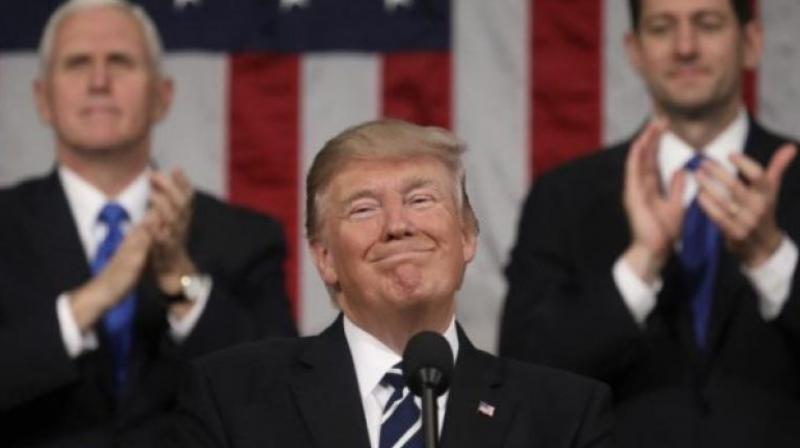 US President Donald Trump will celebrate Diwali at the White House on Thursday, three days ahead of the formal celebrations of the festival of lights in India. (Photo: File)

According to the White House, Trump will participate in the Diwali celebrations by lighting a ceremonial 'diya' (lamp) on Thursday. No other details of the celebrations were immediately available.

Trump's first Diwali celebrations at the White House was in his Oval Office in 2017 in the presence of a select group of Indian-American community leaders and members of his administration. Last year, Trump invited the then Indian Ambassador to the US, Navtej Singh Sarna, for the Diwali celebrations in the Roosevelt room.

Meanwhile, Diwali celebrations have already began in the US. Texas Governor Greg Abbott celebrated Diwali on Saturday with the Indian-American community. "We lit Diwali lamps on display in the Governor's Mansion. We discussed Prime Minister (Narendra) Modi's visit to Texas. We celebrated the victory of light over darkness," he said in a tweet.

Republican Congressman from Texas Pete Olson also tweeted, "Celebrating Diwali at the BAPS Shri Swaminarayan Mandir." In 2017, after lighting the ceremonial 'diya', Trump hailed the Indian community's contribution in different fields. "You have made extraordinary contributions to art, science, medicine, business and education.

America is especially thankful for its many Indian-American citizens who serve bravely in our armed forces and as first responders in communities throughout our great land," he said. Both in 2017 and 2018 Diwali celebrations, Trump referred to his friendship with Prime Minister Narendra Modi. "The United States has deep ties to the nation of India and I am grateful for my friendship with Prime Minister Modi," he had said during 2018 Diwali celebrations.

Meanwhile, a US-based non-profit social and cultural Hindu organisation celebrated Vijaya Dashami at 35 locations across America. Over 7,000 youngsters, adults and children participated in these celebrations throughout the month of October, a media release issued by the organisation, Hindu Swayamsevak Sangha (HSS), said on Monday.

"We need more of the universal values. I hope and pray that all of us subscribe to the idea of 'Vasudhaiva Kutumbakam' (the world is one family) and that we must take care of the entire family all the time," Indian-American Congressman Raja Krishnamoorthi said in his address during a Vijaya Dashami function in Illinois.

The HSS celebrations include a "Sharirika Pradarshan" (a sports demonstration emphasising team spirit, synergy, cohesion and endurance). In addition to yoga, Indian traditional games like kho-kho and kabaddi, followed by 'Ghosh sanchalan' (marching band) were also part of the celebrations.

"Both Guru Nanak and Gandhiji drew inspiration from the same timeless 'dharmika' truth that recognises the divinity of all humanity. Their teachings of compassion, equality and service resonate loudly and clearly today. HSS members should reflect on these teachings as they continue to care for the welfare of all," he said.