US: Man throws 7-month-old son off bridge to his death, convicted of murder

The 23-year-old faces up to 70 years at prison when he's sentenced in May. 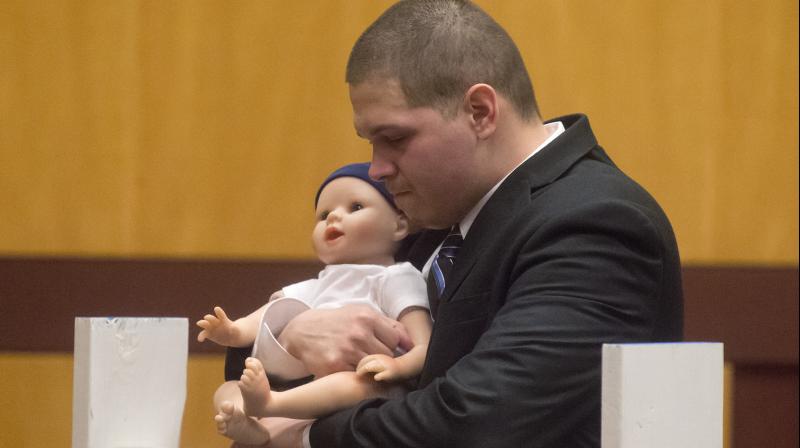 Tony Moreno demonstrates to the jury how he held his son Aaden on the railing of the Arrigoni Bridge in the final moments of Aaden's life, during Moreno's trial Thursday. (Photo: AP)

Middletown: A man charged with throwing his baby son off a 90-foot-high bridge to his death was convicted of murder on Wednesday.

Tony Moreno was convicted by a jury that deliberated for a short time Tuesday afternoon and Wednesday morning. The 23-year-old faces up to 70 years at prison when he's sentenced in May.

Moreno threw 7-month-old Aaden off the Arrigoni Bridge, which spans the Connecticut River between Middletown and Portland, on July 15, 2015, and then jumped, intending to kill himself, prosecutors said.

Moreno, who is from Middletown, spent several days in a hospital. Aaden's body was found by a kayaker 14 miles downstream two days later.

Moreno had a strained relationship with the boy's mother, prosecutors said.

The mother, 20-year-old Adrianne Oyola, testified that things got worse when she refused his marriage proposal a month before the baby's death. The two shared custody of Aaden.

A police officer and a hospital psychiatrist testified that Moreno made statements indicating he had killed the child. Prosecutors also introduced text messages between Moreno and Oyola as evidence, including one in which in response to a question about Aaden's whereabouts Moreno wrote: "He's dead. Soon I will be too."

A crying Moreno testified in his own defense, saying the baby slipped from his arms and he never intended to harm him.