World   Americas  23 Feb 2019  Couple plead guilty to torturing their own kids at US 'House of Horror'
World, Americas 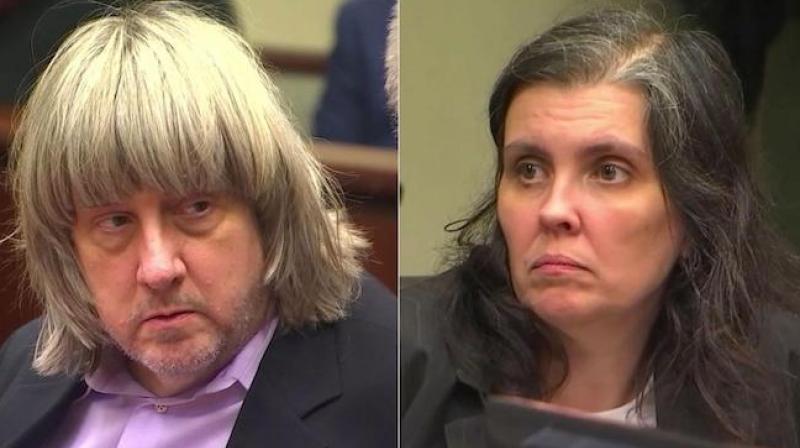 A California couple pleaded guilty on Friday to imprisoning and torturing 12 of their 13 children in a grisly "house of horrors" case that gained international attention. (Photo:Facebook)

Los Angeles: A California couple pleaded guilty on Friday to imprisoning and torturing 12 of their 13 children in a grisly "house of horrors" case that gained international attention.

David Allen Turpin, 57, and his wife Louise Anna Turpin, 50, pleaded guilty to 14 felony counts, including one count of torture, involving their children who range from three to 30 years old, the Riverside County District Attorney's office said.

"This is among the worst, most aggravated child abuses cases that I have ever seen in my career as a prosecutor," District Attorney Michael Hestrin told reporters in announcing the plea.

Hestrin said he was satisfied that the couple had pleaded guilty as it would spare their children from having to testify at a trial.

The elder Turpins, who had been charged with more than seven dozen counts, face a maximum of life in prison at their sentencing in April.

The case came to light last year when one of the children -- 17-year-old daughter Jordan -- escaped through a window from the couple's home in the town of Perris, southeast of Los Angeles, and called the emergency services.

According to excerpts of the call released during court proceedings, she told the dispatcher that two of her siblings were chained to their beds so tightly that their skin was bruised and she struggled to tell the operator their home address.

"I've never been out. I don't go out much," the teen said in the call.

She told responding officers that the house was so dirty she couldn't breathe and that she and her siblings never took baths.

"They chain us up if we do things we're not supposed to," she said. "Sometimes, my sisters wake up and start crying (because of the pain)."

An officer who interviewed the teen after her escape said she was so emaciated that he first thought she was a child.

He said the girl described a routine in which the children were forced to sleep 20 hours a day and in the middle of the night ate a combination of lunch and dinner that most often consisted of peanut butter sandwiches, chips and microwaved food.

Hestrin said during previous court hearings that that children had been subjected to prolonged abuse, were allowed to shower once a year and never saw a doctor.

"Circumstantial evidence in the house suggests that the victims were often not released from their chains to go to the bathroom," he said.

"If the children were found to wash their hands above the wrist area, they were accused of playing in the water and they would be chained up."

Since their rescue, the children have been in the care of child protective services.

"I met with all the victims prior to today, all of them, including the three-year-old," Hestrin said.

"I was very taken by them, by their optimism, by their hope for their future.

"They have a zest for life and huge smiles and I'm optimistic for them. And I think that's how they feel about their future."