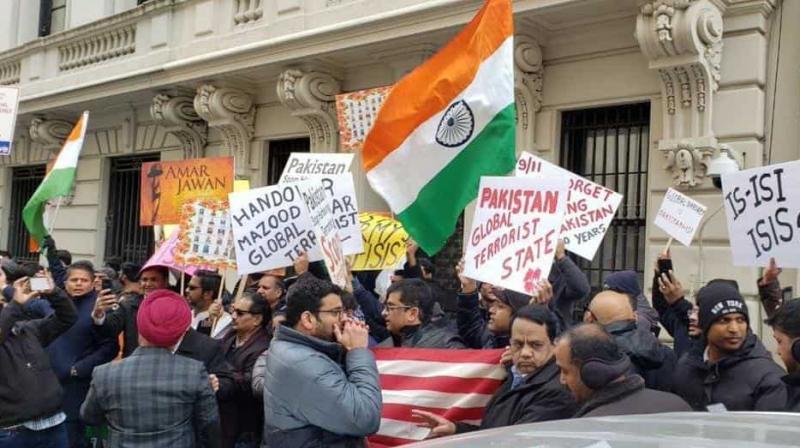 JeM has claimed the responsibility of the Pulwama attack in Jammu and Kashmir that killed 40 CRPF personnel. (Photo:Twitter)

Chicago: Braving sub-zero temperature, Indian-Americans from in and around Chicago on Friday held peaceful protests outside the Pakistani and Chinese diplomatic missions in this windy city.

Indian-Americans urged the Chinese Consulate in Chicago that Beijing should “stop sheltering and supporting hard line extremist terrorists” at the United Nations.

JeM has claimed the responsibility of the Pulwama attack in Jammu and Kashmir that killed 40 CRPF personnel.

“China should urge Pakistan to stop supporting terrorism worldwide,” Bharat Barai, chairman of Indian American Cultural Centre, said in a memorandum to the Consul General of China in Chicago. This was the first ever protest by the Indian-American community in front of the Chinese Consulate in Chicago.

#WATCH Members of Indian community protested outside the Pakistan consulate in New York,US on 22 February, against #PulwamaTerrorAttack. pic.twitter.com/sXJCDA6jXF

In a memorandum submitted to the Pakistani Consulate in Chicago, the Indian-American community urged Pakistan to stop supporting terrorists.

The community leaders said Pakistan is a hub of terrorism and is constantly manufacturing company of terrorists, while harbouring and nurturing them to be “dark men of death”.

Indian-Americans in New York, New Jersey and Connecticut on Thursday also held a candle light vigil at the Royal Alberts Palace. The event was organised by the Federation of Indian Association.