Officials believe they’ve entered a new chapter of the pandemic response, moving from crisis mode to sustained mitigation and management 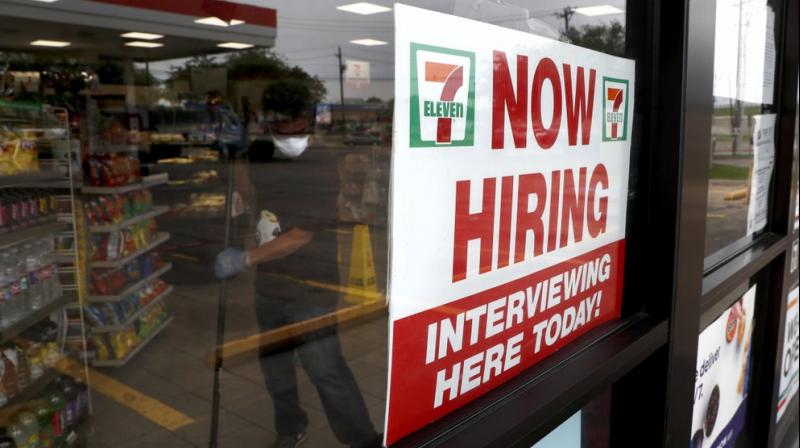 A sign on the window at a 7-Eleven store reads, "Now Hiring," as an employee inside the store wears a mask and gloves while mopping the floor amid the coronavirus health crisis in Dallas, Wednesday, April 22, 2020. (AP Photo)

WASHINGTON: For weeks, the Trump administration played up the dangers of the coronavirus as it sought to persuade Americans to disrupt their lives and stay home. Now, as President Donald Trump aims for a swift nationwide reopening, he faces a new challenge: convincing people it’s safe to come out and resume their normal lives.

It’s a defining question for a cloistered nation and a political imperative for Trump, whose reelection likely rides on the pace of an economic rebound.

“We need to create the kind of confidence in America that makes it so that everybody goes back to work,” said Kevin Hassett, a White House adviser and former chair of the Council of Economic Advisers. “And that confidence is going to require testing and confidence that your workplace is a healthy place, but also confidence in the economy.”

At the White House, officials believe they’ve entered a new chapter of the pandemic response, moving from crisis mode to sustained mitigation and management.

It began last Thursday with the release of guidelines to governors for how to safely reopen their states. Trump and Vice President Mike Pence celebrated Americans for successfully “flattening the curve” of the epidemic.

Governors have been lifting restrictions each day since then, including aggressive moves announced Wednesday in Montana and Oklahoma. The Montana governor gave schools the green light to open their doors in early May, and Oklahoma will allow salons, barbershops, spas and pet groomers to reopen Friday.

Trump predicted earlier this month that the economy would take off like a “rocket ship once we get back to business.” But experts say the recovery will be far slower.