During his visit to Washington for the 2+2 US-India dialogue, Jaishankar had refused to meet Jayapal. 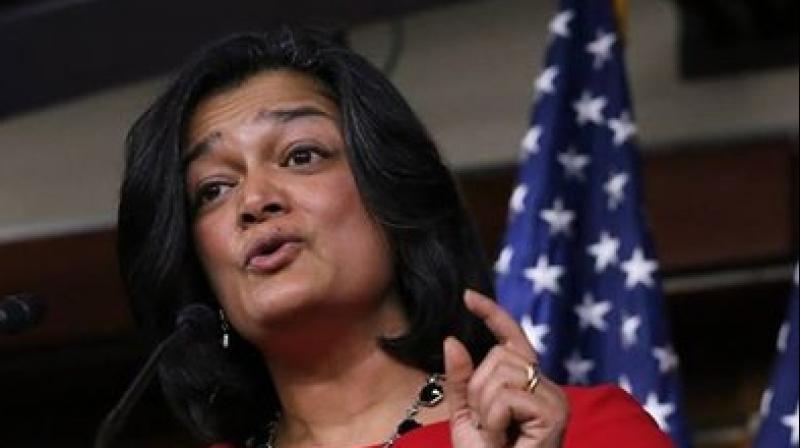 Multiple sources privacy to the deliberations here last week indicate that in addition to Jayapal, the list included two other lawmakers who are part of the same group. (Photo: Twitter)

Washington: Congressman Eliot Engel, Chairman of the House Foreign Affairs Committee, was not aware of the inclusion of non-member Indian-American Congresswoman Pramila Jayapal and two others to the list of the lawmakers to meet the visiting External Affairs Minister, S Jaishankar, here last week, sources said.

During his visit to Washington for the 2+2 US-India dialogue, Jaishankar had refused to meet Jayapal who had introduced a Congressional resolution on Kashmir urging India to lift all the restrictions in Jammu and Kashmir imposed after the abrogation of Article 370 on August 5.

Engel, the Democratic lawmaker from New York, who along with Ranking Member Michael McCaul, were initially scheduled to meet Jaishankar on December 18, is believed to have come to know about the addition to the team only after the Indian Embassy here objected to the changes what was initially agreed upon, sources told PTI.

But by then, the morning of December 18, when Engel came to know about it, it was too late for him and it would have been quite inappropriate for him to take any step that could have been seen as going against his own Congressional colleagues, they said.

The Indian Embassy, miffed at the manner in which additional names of lawmakers who were not even members of the House Foreign Affairs Committee were added without keeping into confidence, cancelled the meeting, the sources said.

Multiple sources privacy to the deliberations here last week indicate that in addition to Jayapal, the list included two other lawmakers who are part of the same group and in the recent past have been hostile in their attitude with India on issues of Kashmir, human rights and religious freedom.

The PTI was not able to independently verify the name of the two other lawmakers.

Before his arrival in the US to attend the 2+2 dialogue on December 18, Jaishankar had requested a meeting with the leadership of the House Foreign Affairs Committee and Senate Foreign Relations Committee, which are essentially the heads of the lawmakers from two parties  Democratic and Republican -- in those two committees.

In the Senate, the Republican Senator is the Chairman and the Democratic lawmaker is the Ranking Member.

It is just the opposite in the House Foreign Affairs Committee.

Jaishankar's meeting with the Senate committee went as per the schedule.

Notably, the House meeting was scheduled at the same time when President Donald Trump agreed to meet Jaishankar and Defence Minister Rajnath Singh in his Oval Office.

It was initially planned to be just a courtesy call and a photo opp.

But Trump, reportedly in a cheerful mood, that too on an impeachment day, went beyond his schedule and spent some 40 minutes with the visiting Indian leaders.

In such a scenario, the meeting with the House Foreign Affairs Committee leadership would not have had happened anyway, the sources said.

In its communication, the Indian Embassy asserted that the External Affairs Minister had only sought meetings with the leadership of the Foreign Affairs Committee and that is what was agreed upon.

The embassy reportedly queried about the rational of adding at least one and possibly three non-members to the list and cancelled the meeting upon getting an unsatisfactory response.

In an interview to PTI last week, eminent Indian-American Bharat Barai, who has engaged with Jayapal in the past on her Kashmir resolution, alleged that Jayapal probably wanted to indulge in a heated argument with Jaishankar and then go to the media and get propaganda out of it.

The Chennai-born first-ever Indian-American woman elected to the House of Representatives has been one of the few lawmakers who are mostly from the Democratic Party raising their voices against the Indian government's move on Jammu and Kashmir.

Jayapal, 54, ignored the voices of the diaspora from across the country as she went ahead with her pre-announced plans to introduce a resolution on Kashmir in the House of Representatives early this month.

The resolution, introduced in the House of Representatives after several weeks of efforts by Jayapal, urges India to lift as swiftly as possible all restrictions on communications in Jammu and Kashmir which were imposed following the abrogation of Article 370.

It also urges to preserve religious freedom for all residents.

India has defended the restrictions in Kashmir on the grounds that they were imposed to prevent Pakistan from creating more mischief through proxies and terrorists following the abrogation of Article 370 which ended the special status of Jammu and Kashmir.