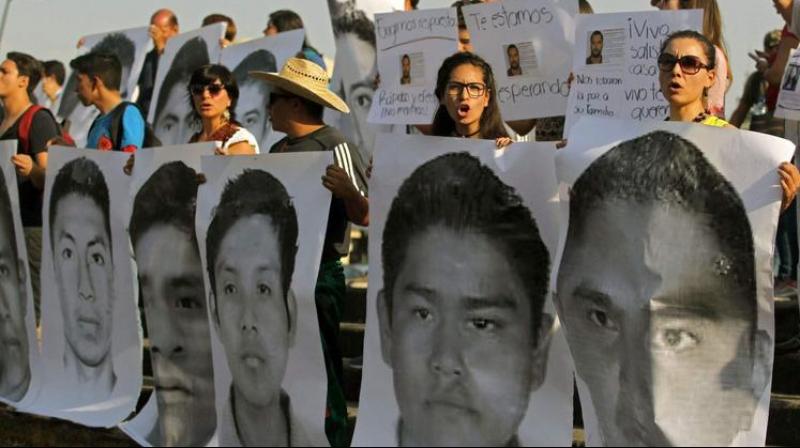 Relatives and friends of three missing students from the University of Audiovisual Media take part in a demonstration April 19 in Guadalajara demanding that their loved ones be returned alive. On Monday, authorities said the three had been killed, probably by a drug cartel. (Photo: AFP)

Mexico City: Three missing Mexican students were killed last month in the western state of Jalisco and their bodies dissolved in acid after criminals confused them with members of a rival gang, authorities said Monday.

The three film students were last seen in the municipality of Tonala after their car broke down and they were later kidnapped by at least six people, who tortured and killed them, according to Jalisco state prosecutors.

“Subsequently their bodies were dissolved in acid so that no trace of them remained,” the state prosecutors’ office said.

State prosecutor Raul Sanchez said that two people had been arrested so far in the investigation.

Another official told Reuters, on condition of anonymity since he was not authorized to speak to the media, that investigators are analyzing more human remains found on the premises of the building where the young men were dissolved.

Prosecutors said the youths were confused with members of another gang by gunmen from the Jalisco New Generation Cartel (CJNG), which has become the most powerful in Mexico, according to US authorities.

Criminal groups in Mexico often kidnap, torture, dismember and even dissolve their victims in acid and many of the remains are dumped in clandestine graves.

In 2014, 43 student teachers disappeared in the southern state of Guerrero and the government said they were kidnapped by police who handed them over to a criminal group that killed them and burned their bodies.

International observers objected to the government’s investigation and the case shook the administration of President Enrique Pena Nieto, who has seen his popularity decline sharply amid corruption allegations and a spike in violence.

More than 25,000 people were murdered in 2017 in Mexico. Homicides hit their highest level in records going back 20 years.