Bush was admitted to the same hospital about a year ago for a cough that was later diagnosed as a mild case of pneumonia. 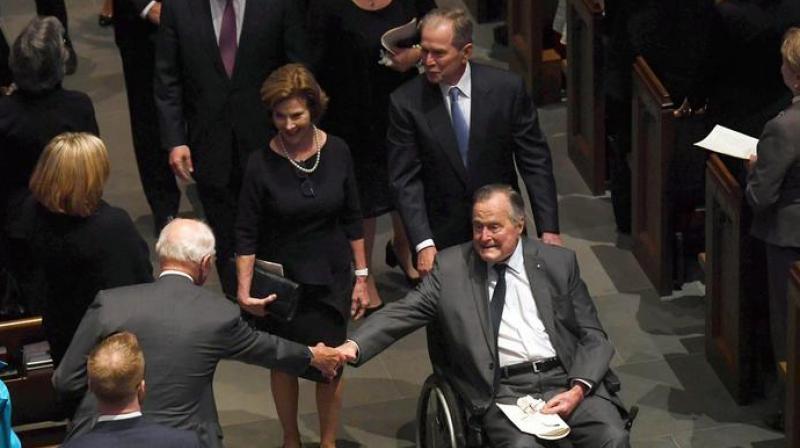 Austin: Former US President George H.W. Bush was admitted to a Houston hospital for an infection that spread to his blood a day after the funeral of Barbara Bush, his wife of seven decades, a family spokesman said on Monday.

Bush, 93, was admitted to Houston Methodist Hospital on Sunday, spokesman Jim McGrath said in a statement. Bush was seen in a wheelchair on Saturday at the funeral of his wife, the former US first lady, who died last Tuesday. The two had been married for 73 years.

“He is responding to treatments and appears to be recovering,” McGrath said in a statement.

Bush, the country’s oldest living ex-president, served a single term in the Oval Office from 1989 through 1993. He was admitted to the same hospital about a year ago for a cough that was later diagnosed as a mild case of pneumonia, McGrath said at the time.

Bush is the father of former Republican President George W. Bush, who served two terms from 2001 through 2009, and former Florida Governor Jeb Bush, who unsuccessfully sought the 2016 Republican nomination for president.

George H.W. Bush would write a letter to his wife on each wedding anniversary, Jeb Bush said in a eulogy at the Saturday funeral, before reading aloud one such letter from 1994, a year after his father left the White House.

“I was very happy on that day in 1945, but I’m even happier today,” he read, as his father squeezed his eyes shut and wept.

“You have given me joy that few men know ... I have climbed perhaps the highest mountain in the world, but even that cannot hold a candle to being Barbara’s husband.”

To honour his late wife’s commitment to literacy, the former president wore to the funeral a pair of colourful socks “festooned with books,” McGrath tweeted, adding that Barbara Bush had raised more than $100 million for the cause.