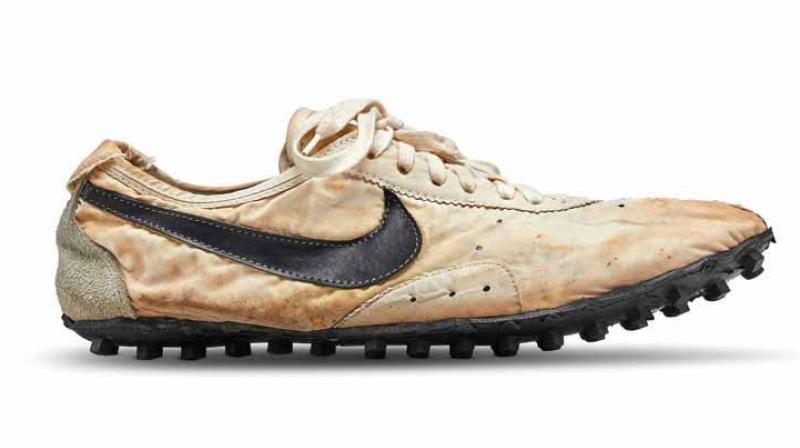 Nike co-founder Bill Bowerman designed the flat racing 'Moon Shoe' which was made for runners at the 1972 Olympic trials. (Photo: Twitter)

New York: A new world record for a pair of sneakers was set at auction on Tuesday when an avid collector splashed out USD 437,500 on Nike's 1972 "Moon Shoe," Sotheby's said.

The sale smashed the previous record of USD 190,373 spent in 2017 on a pair of signed Converse worn by Michael Jordan in the 1984 Olympic basketball final, the New York-headquartered auction house said in a statement.

It was also well above the pre-sale estimate of USD 160,000, Sotheby's added.

Canadian collector Miles Nadal was the successful bidder in the online auction, adding to the 99 pairs of other hard-to-find shoes that he bought in a private sale last week.

"I am thrilled to acquire the iconic Nike 'Moon Shoes,' one of the rarest pairs of sneakers ever produced, and a true historical artifact in sports history and pop culture," Nadal said.

Nike co-founder Bill Bowerman designed the flat racing 'Moon Shoe' which was made for runners at the 1972 Olympic trials.

Sotheby's said that just around 12 pairs were manufactured and that the set sold Tuesday was "one of only a handful of pairs known to exist".

The auction house joined up with streetwear marketplace Stadium Goods to sell 100 of the rarest sneakers ever made.

The 61-year-old Nadal spent USD 850,000 buying 99 of them privately on Wednesday with organizers holding back the 'Moon Shoe' for a public sale.

Nadal plans to display the footwear, which includes Nike sneakers based on those worn by Marty McFly in hit movie "Back to the Future II," at his private museum in Toronto.