Trump, with overall approval ratings permanently stuck at 40 percent range, is the first president to seek reelection after impeachment 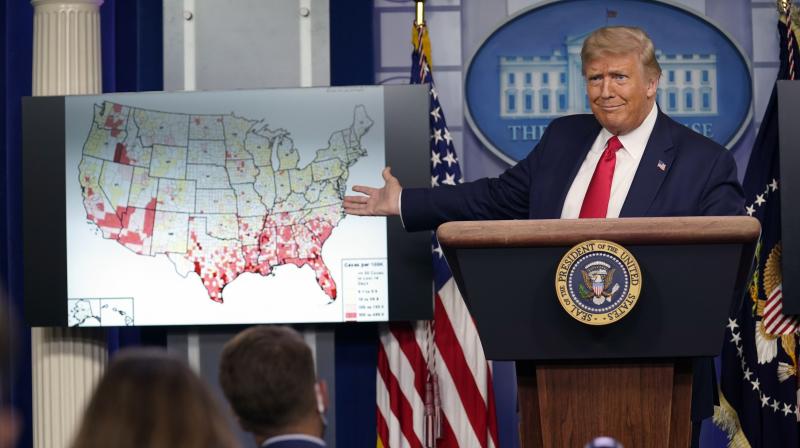 President Donald Trump gestures towards a graphic on the coronavirus outbreak as he speaks during a news conference at the White House in Washington. (AP)

Washington: Donald Trump has 100 days from Sunday to save his presidency, while America tries to avoid a collective nervous breakdown ahead of one of the most divisive, tension-filled elections in US history.

Coronavirus is ravaging the economy, adding steadily to a death toll already over 140,000, while undermining national trust in government institutions at every level.

Add explosive protests against racism and police brutality, leftist-led riots, flourishing right-wing conspiracy theories, and the specter of Russian meddling -- and you have a country more on edge than at any time since the cataclysmic 1960s.

At the center is real estate magnate and surprise 2016 presidential victor Trump, a man who boasts he never tires of "winning" yet faces possibile humiliation on November 3.

His Democratic challenger Joe Biden, whom Trump derides as "weak," "sleepy" and mentally incompetent, leads by double digits in some polls.

Trump is 74, Biden 77 -- a match-up of two elderly white men seemingly out of step with 2020's uprisings against racism and sexism.

One is a billionaire born into extreme privilege, while the other, with three decades in the Senate and two terms as vice president under Barack Obama, is the epitome of the professional politician.

Yet Trump vs Biden will deliver all the upheaval a confused and bitter US electorate can stomach.

Trump's pitch boils down to claiming Biden will have Americans "cowering to radical left-wing mobs."

And Biden, no less apocalyptic, says he's fighting for "the soul of America."

Down but not out

On Thursday, Trump cancelled the traditional, big Republican convention planned in Florida next month due to coronavirus concerns. The Democrats scrapped their version weeks ago.

"It's a different world," Trump said.

Polls give Biden an advantage nationally, strong leads in swing states, and even a shot at Republican strongholds like Texas. Congressional Democrats, who already control the House, are eying recapture of the Senate.

Many incumbents in Trump's predicament might at this point start planning their post-presidential libraries.

Trump presides over mass unemployment -- even if this was triggered by the coronavirus shutdown -- racial unrest and a growing crisis of confidence. On coronavirus, the biggest issue of the day, polls show that two-thirds of Americans have no faith in his leadership.

To boot, Trump, with overall approval ratings permanently stuck in the low 40 percent range, is the first president to seek reelection after impeachment.

Yet no one counts him out.

Belittled as a clown in 2016, he handily defeated all the top Republican establishment names for the nomination. He then came from behind to defeat the Democrats' polished candidate Hillary Clinton.

Trump believes he still has the secret sauce.

"I'm not losing, because those are fake polls," he insisted on Fox News last weekend. "They were fake in 2016 and now they're even more fake."

COVID-19, which Trump calls "the invisible enemy," makes a frustrating target for a man used to dealing in large, tangible objects, like skyscrapers.

But he's having an equally hard a time getting to grips with Biden.

The Democrat is running a unique campaign from his Delaware home, with no rallies, few media interviews and even rarer press conferences.

This began with social distancing but has grown into what critics mock as the "bunker strategy" -- and an extraordinarily lucky boost for a candidate widely seen as a gaffe machine.

Rather than take risks, Biden is able to sit back, ignore the #HidenBiden hashtag jibes, and watch Trump lurch ever deeper into his own self-inflicted troubles.

Until the onset of COVID-19 and the economic downturn, Trump was on a roll.

His then uber-confident campaign manager Brad Parscale described the Republican reelection team in May as the "Death Star" in the "Star Wars" movies and tweeted they were about to press the "FIRE" button.

Today, Parscale has been demoted and that vaunted machine more resembles a misfiring rocket.

Trump's mass rallies, vital to his political identity, have fizzled due to health risks, while his trademark bravado and name-calling sits less easily in a country shaken by death and economic misery.

Cornered, Trump is doubling down with fearmongering and ever darker warnings about his opponent. It's a vision of chaos, violent crime and what Trump tweeted is Biden's desire to "abolish the American Way of Life."

Then he went further.

Asked on Fox News if he would accept the results, as every president before him has, Trump said this: