With Trump's healthcare bill dead, US Republicans turn to taxes

Treasury secretary Steven Mnuchin said that tax reform in many ways was 'a lot simpler' than healthcare reform. 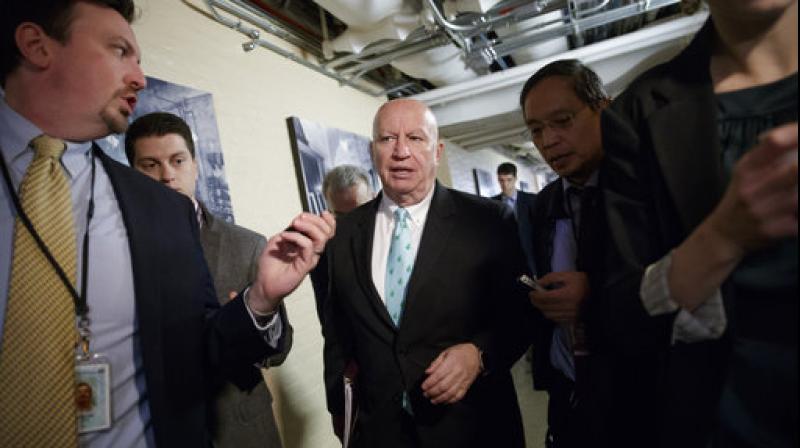 House Ways and Means Committee Chairman Rep. Kevin Brady, R-Texas, is pursued by reporters as he walks through a basement corridor on Capitol Hill in Washington. (Photo: AP)

Washington: After failing to repeal Obamacare, Republicans in the US Congress quickly pivoted on Friday to President Donald Trump’s next priority: overhauling the federal tax code, but their plan has already split the business community.

Division among Republicans was the chief cause of the embarrassing setback on Obamacare, and similar fault lines have been evident for months in the Republicans’ tax plan, mainly over an untested proposal to use the tax code to boost exports.

House of Representatives tax committee chairman Kevin Brady conceded the demise of a Republican plan to roll back Obamacare could make the path to tax reform harder. “This made a big challenge more challenging. But it’s not insurmountable,” he said after Ryan cancelled a vote on an Obamacare rollback bill.

But Brady said he and House speaker Paul Ryan are all-in on tax reform.

Brady said House republicans plan to begin moving on tax reform this spring and to pass legislation before Congress’s summer recess in late July. “We are going to work with the administration to get this done,” he said.

Trump has been unclear about his position on the most problematic feature of the House republicans’ tax “blueprint,” a proposal known as the border adjustment tax that would cut taxes on exports and raise them on imports.

Treasury secretary Steven Mnuchin said on Friday that tax reform in many ways was “a lot simpler” than healthcare reform.

“We are able to take the tax code and redesign things and I think there is very, very strong support,” Mnuchin said at an event hosted by news website Axios.

Comprehensive tax reform is a policy goal so complex that it has defied successive Congresses and presidents since 1986 when it was last accomplished under former President Ronald Reagan.

The US tax code is riddled with narrow subsidies and loopholes, many of them deeply embedded in the economy and defended by the interests they benefit, such as the mortgage interest deduction and the business interest deductibility.

Brady’s panel has been working on a plan since mid-2016 that would cut the corporate tax rate to 20% from 35%, end taxing foreign profits for US-based multinationals and cut other tax rates for businesses and investors.

The plan has divided businesses, prompting import-dependent industries to warn of higher prices for consumer goods from clothing and electronics to gasoline.

Brady has been adamant that border adjustment will be part of the House tax reform, saying earlier this week that the provision was “a given” for final legislation but would include a transition period for import-heavy industries.