The left tilt comes amid social upheaval and anger over Trump's response to the pandemic, anti-racism protests and mass unemployment 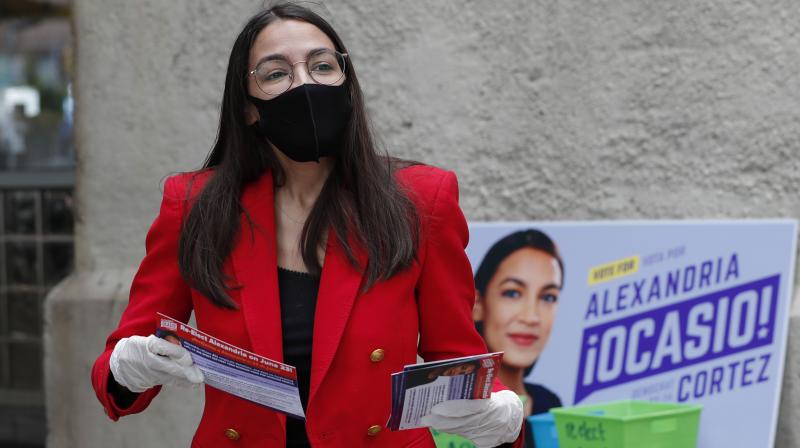 First-term U.S. Rep. Alexandria Ocasio-Cortez, D-New York, awaits passersby as she hands out leaflets explaining how to vote early or by absentee ballot during a stop at the Parkchester subway station in the Bronx borough of New York. (AP)

New York: Two years after Alexandria Ocasio-Cortez stunned the US political establishment by winning a seat in Congress and becoming one of its best-known members, another upstart New Yorker is gaining attention, one of several likely electoral wins galvanizing the Democratic left ahead of November.

Jamaal Bowman, a black 44-year-old former middle school principal, appears set to topple Eliot Engel -- a 73-year-old white centrist who has spent two decades in Congress -- in a district just north of Manhattan, according to a preliminary count from the New York Board of Elections.

Also in New York, Mondaire Jones, a black 33-year-old who is openly gay and another favourite among progressives, likely will best a crowded field in a neighbouring congressional district.

Ocasio-Cortez -- who along with progressive senators and former presidential candidates Bernie Sanders and Elizabeth Warren endorsed both Bowman and Jones -- scored a resounding victory against a well-funded primary rival for her seat representing parts of the Bronx and Queens in the House.

All three of the candidates are from overwhelmingly Democratic districts, and primary wins virtually guarantee a congressional seat.

"We are proving that the people's movement in NY isn't an accident. It's a mandate."

On the state level, leftist Julia Salazar breezed past opponents to maintain her New York senate seat as fellow Democratic Socialist Jabari Brisport appeared poised to join her there.

And in Kentucky a progressive insurgent, Charles Booker, delivered a spirited challenge against a powerhouse fundraiser opponent in hopes of securing the Democratic nomination to take on top Republican Mitch McConnell.

The tilt left comes amid social upheaval and anger over a piecemeal coronavirus response and mass unemployment, as well as a surge of anti-racism protests over police brutality.

Bowman's race in many ways encapsulated the moment: Raised by a single mother, he's lived in public housing and discussed being beaten by police as an 11-year-old.

"It's the confluence of this perfect storm," said Nadia E. Brown, a scholar of politics and African-American studies at Purdue University.

"It's the pandemic, it's the economic downturn and it's this racial unrest -- these have given people ample opportunity to think deeply about their role in democracy."

For Emerson Russell-Grad -- a member of the Democratic Socialists of America since 2016 who campaigned for Bowman -- Tuesday's wave of progressive wins comes after years of organizing.

"Really what it comes down to is building that multi-racial, multi-generational working class movement," the 24-year-old recent college graduate said.

Brown is skeptical that a progressive influx will take over the Democratic party in what she called a "pretty solidly moderate" United States.

"But what I think will happen is that these progressives will have a large enough voice... to push those that are in power to rethink some standard policies," she told AFP.

It's a push already in motion: Along with Democratic Socialist Ocasio-Cortez, progressive Democrats Ayanna Pressley (Massachusetts), Ilhan Omar (Minnesota) and Rashida Tlaib (Michigan) have made inroads as some of Congress' most outspoken figures.

Brian Arbour, a politics professor at the John Jay College of Criminal Justice, called it clear "the Democratic Party in general is moving to the left" platform-wise, as state healthcare expansion, climate change policies and gun restrictions gain broader support within its ranks.

And while progressives can more likely sway voters in urban districts, Arbour noted that Jones' win came in a more suburban locale.

Still, he said, the Democrats "easily nominated Joe Biden" -- a moderate in the style of Hillary Clinton and Barack Obama set to take on Donald Trump in November -- indicating a general inclination to toe the line.

But organizer Russell-Grad said leftist Sanders' presidential primary loss against Biden was part of a "much longer battle."

"It goes way beyond just the presidency, it's at every level of government," he said. "What we're fighting for is consciousness-building amongst working people."

"Seeing candidates that have never been involved in electoral politics before running and then achieving victories -- it really shows that the movement is successful."