Ardern, became one of few world leaders to give birth while in office, brought her daughter to hall and was seen cuddling and kissing her. 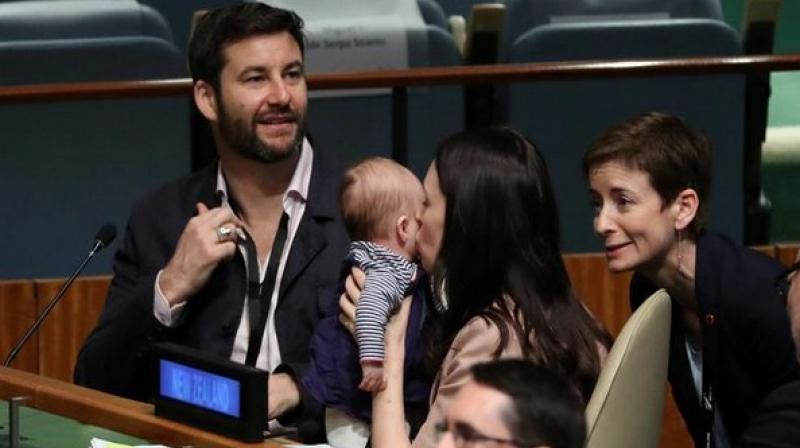 Ardern, who also became one of the few world leaders to give birth while in office, brought her daughter Neve to the hall and was seen cuddling and kissing her, with her partner Clarke Gayford sitting beside her. The trio was present at the Nelson Mandela Peace Summit, CNN reported.

"I wish I could have captured the startled look on a Japanese delegation inside UN yesterday who walked into a meeting room in the middle of a nappy change. Great yarn for her 21st," Gayford, who is also a television fishing show host, wrote on his Twitter handle.

Describing the move to bring her baby into the premises of the world's top body as unique and beautiful, Ardern told New Zealand Herald, "Neve is actually nearby me most of the time in New Zealand, she's just not always caught. But here, when she's awake, we try and keep her with me. So that was the occasion."

The 38-year-old remarked that she and her partner were bearing the expenses of Neve's trip to the United States.

"There is no spousal program for this, so we just made a judgment call that we would cover his travel for this trip. He will be going to some things, but he's primarily travelling to care for Neve. It depends what the jet lag does to them both. She's a good sleeper and we don't know whether that will mean she ends up sleeping a lot in the day rather than the night," Ardern added.

Earlier, the couple said that Neve would accompany them to their trip. Gayford has been tasked to fulfill his parenting duties, as Ardern is breastfeeding.

Last month, Ardern returned to office following a six-week maternity leave after giving birth to Neve in June. In her absence, Deputy Prime Minister Winston Peters acted as the caretaker.

In August last year, Ardern became the youngest female leader to be appointed as New Zealand's Prime Minister, succeeding her predecessor Bill English. She is also the youngest leader of the Labour Party.