Trump said these outcomes give American-made automobiles, medicines and agricultural crops a much better access to Korean markets. 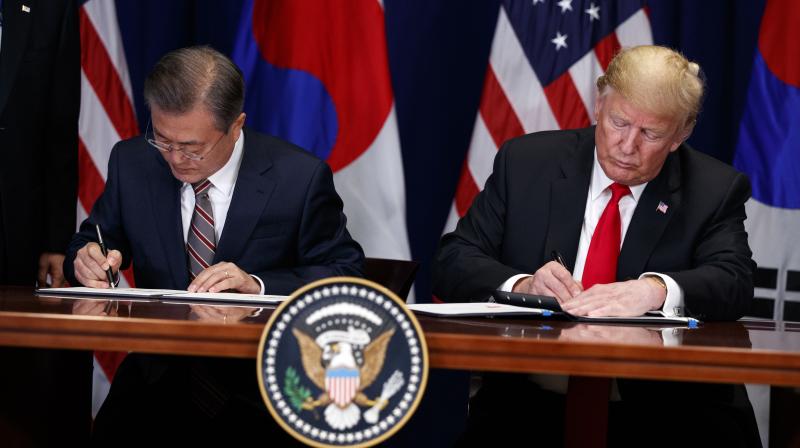 Washington: US President Donald Trump on Monday inked his administration's first trade deal with South Korea, which he described as "a historic milestone" and a promise fulfilled to his countrymen.

"The new US-Korea agreement includes significant improvements to reduce our trade deficit and expand opportunities to export American products to South Korea," Trump told reporters at the signing ceremony in New York on the sidelines of the annual United Nations General Assembly.

Describing it as a "very big deal" and a great day for the two countries, Trump said these outcomes give the finest American-made automobiles, innovative medicines and agricultural crops a much better access to Korean markets.

"Through negotiations to improve KORUS, the United States has secured changes that will reduce the trade deficit and ensure that KORUS is a good deal for American workers, farmers and businesses," it said, adding that the US achieved important steps to improve the large trade deficit in industrial goods and address the KORUS implementation concerns that have hindered American export growth.

Trump said the agreement will reduce bureaucracy and increase prosperity in both the countries. Workers in the US and South Korea will find new customers and new opportunities to expand and grow.

"Our teams will be working hard to ensure that the terms of the deal are fully implemented," he said. South Korean President Moon Jae-In said the free trade agreement between the two countries is significant in the sense that it expands the alliance to the economic realm as well.

"Today we have made amendments and modifications to improve the existing agreement. With the swift conclusion of the negotiations for the revision, the uncertainty surrounding our FTA has been eliminated. And, as a result, companies from both countries will now be able to do business under more stable conditions," he said.

In addition, he hoped that this will provide them with a platform upon which the economic ties of the two countries will be elevated to a higher level in a freer, fairer, and more mutually beneficial direction.

During the meeting, Moon shared with Trump the outcomes of September's inter-Korean summit, which included Democratic People's Republic of Korea Chairman Kim Jong Un's reiteration of his commitment to complete denuclearisation. Trump commended Moon on conducting a successful third inter-Korean summit with the North Korean leader, Chairman Kim, and noted that there remained much work to be done to accomplish their mutual goal of achieving the final, fully verified denuclearisation of North Korea.

"The two leaders agreed on the importance of maintaining vigorous enforcement of existing sanctions to ensure North Korea understands that denuclearisation is the only path to economic prosperity and lasting peace on the Korean Peninsula," the White House said in a readout of the meeting.

"Both leaders also discussed plans for a second summit between President Trump and Chairman Kim in the not too distant future and committed to closely coordinate on next steps," it added.