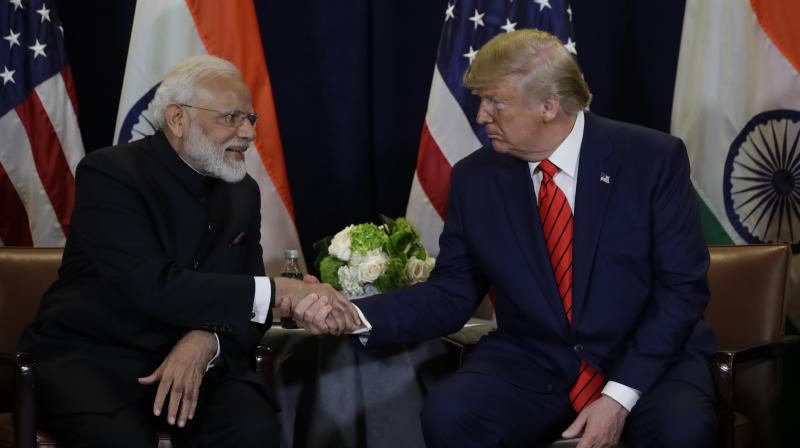 The two leaders met for the second time in less than three days on Tuesday. (Photo: File)

New York: Addressing media after a bilateral meeting with Prime Minister Narendra Modi on Tuesday, US President Donald Trump said that India and the United States will have a trade deal very soon.

The two leaders met for the second time in less than three days on Tuesday.

US Secretary of State Mike Pompeo was a part of the US delegation.

On Sunday, Donald Trump joined PM Modi in Houston and addressed the “Howdy, Modi!” event, which was attended by more than 50,000 members of the Indian diaspora and top US lawmakers.

The bilateral meeting came in the backdrop of choppy trade ties between the countries after Trump’s administration in June terminated India's designation as a beneficiary developing nation under the Generalised System of Preferences (GSP) programme.

The GSP is the largest and oldest US trade preference programme and is designed to promote economic development by allowing duty-free entry for thousands of products from designated beneficiary countries.

In June, the US had ended duty-free access for about USD 5.7 billion worth of Indian exports under the GSP, including chemicals, plastics, leather and rubber goods, and auto parts. India was the largest beneficiary of the GSP, which dates from the 1970s and is designed to help developing countries. India responded with higher retaliatory tariffs on 28 US products, including almonds, apples and walnuts.