The victim's wife demanded to know from US government what it is going to do to stop hate crimes against minorities. 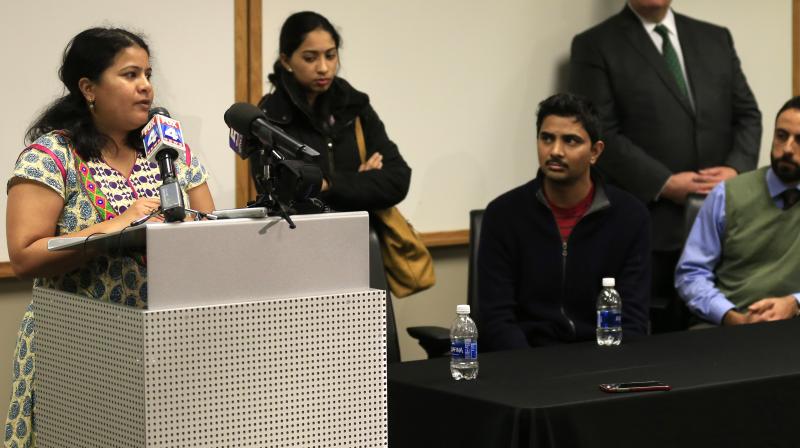 Sunayana Dumala addresses the media in Olathe, Kansas, Friday, a day after her husband, Srinivas Kuchibhotla, was shot dead in an apparent hate crime. (Photo: AP)

Houston: Sunayana Dumala, the grieving wife of 32-year-old Srinivas Kuchibhotla, the Indian engineer who was shot dead in an apparent racial attack by a Navy veteran in Kansas City on Wednesday, has demanded to know from the Trump administration when hate crimes will be stopped.

“Initially I was not confident about living here, but Srinivas convinced me, saying good things happen to good people. Always think good and do good and good will happen to you, he would say,” recalled an emotional Ms Dumala while addressing a news conference organised by GPS-maker Garmin, the company where her husband worked.

She said her husband was enjoying a glass of beer with his friend when he was needled by the culprit, but Srinivas minded his own business. “My husband should have moved out. But he probably thought that he was not doing anything wrong. The guy then came back and did what he had to do,” she said.

“The suspect told a bartender that he shot two Muslim guys. How did he decide that? Does the colour of the person say that he is a Muslim, Hindu or Christian?”

She demanded to know from the US government what it is going to do to stop hate crimes against minorities. She also demanded an assurance that she can come back and fulfil her husband’s dream of being successful in whatever field she chose.

Ms Dumala said after moving to Kansas, she and Srinivas had got their dream house which Srinivas himself painted. She said that at times they would be concerned over shooting incidents and doubted whether they should stay in the US. But, she said, her husband always assured her, saying, “Good things happen in America.”

“He did not deserve a death like this,” Ms Dumala said. “I don’t know what to say. We’ve read many times in newspapers of some kind of shooting happening somewhere. I was always concerned, ‘Are we doing the right thing staying in the US or America?’ But he always assured me good things happen in America.”

The gunman, she said, “has taken a life, a very lovable soul, from everyone.” Although she did not mention Donald Trump by name, she did say, “Not everyone will be harmful to this country.”

On Wednesday night, Adam Purinton, 51, reportedly got into a racial argument with Srinivas and his friend Alok Madasani and shouted “get out of my country” and “terrorist” before opening fire at them.

Mr Madasani, who received bullet injuries, said that while he and Srinivas were on the patio of Austins Bar and Grill in Olathe, Kansas, Puritnton asked them what type of visa they had and whether they were in the country illegally.

Ian Grillot, 24, an American who tried to intervene and received injuries in the firing at the bar, is recuperating in hospital.

The tragedy has led to fears among immigrants, who feel they are being targeted since President Donald Trump announced plans to ban travellers from some countries and build a wall along the Mexico.

“Srinu,” as Srinivas Kuchibhotla called himself on his Facebook page, managed helicopter programmes at Garmin. He had a master’s degree in electrical and electronics engineering from the University of Texas.

Srinivas hailed from Hyderabad, while Alok is from Warangal. Flags at Garmin’s offices flew at half-staff on Friday, and the company said it was “devastated by the senseless tragedy.”

The Council on American-Islamic Relations called on the US government to “consider filing hate crime charges in order to send a strong message that violence targeting religious or ethnic minorities will not be tolerated,” the Times reported. Purinton is scheduled to appear in court Monday and the bar is slated to reopen today.