Bernie Sanders in the line of fire at democratic presidential debate 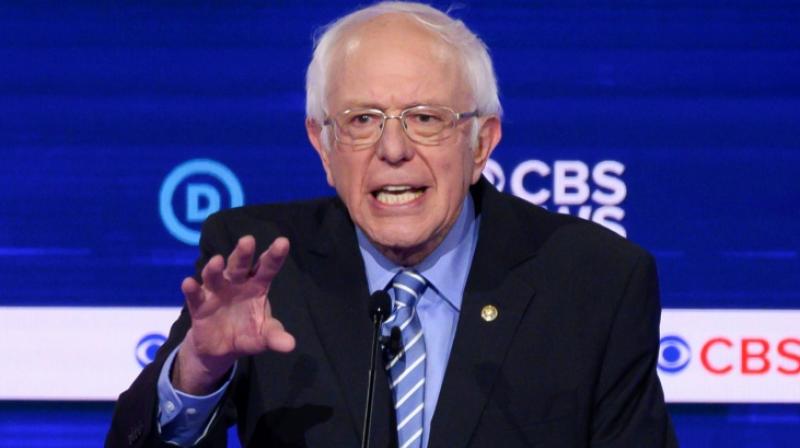 Bernie Sanders pushed back strongly at his Democratic rivals, saying his campaign of "energy and excitement" was best placed to beat Donald Trump. AFP photo

Democratic White House hopefuls rounded on leftist frontrunner Bernie Sanders at a feisty debate Tuesday, attacking him as too extreme for American voters and a flawed challenger to President Donald Trump.

Joe Biden, who needs a victory in South Carolina's crucial primary on Saturday to keep his campaign alive, hit Sanders as soft on gun control, while billionaire tycoon Michael Bloomberg claimed Russia was working to help Sanders win the nomination — betting he would be defeated in November.

And Sanders' rivals joined in savaging the self-described democratic socialist as too radical to appeal to a broad swathe of Americans.

Fellow progressive Elizabeth Warren and centrists Pete Buttigieg and Amy Klobuchar, all desperate to halt Sanders' momentum before it is too late, laid into his ability to deliver on costly programs like universal health care and tuition-free college.

Buttigieg, a 38-year-old military veteran presenting himself as a unifier, warned a Sanders fight against Trump would spell “chaos” and divide the nation.

“I tell you what it adds up to,” Buttigieg said, “it ends up as four more years of Donald Trump.”Sanders is in pole position in South Carolina, the last step before “Super Tuesday” March 3 when 14 states vote and a whopping one third of all delegates — the representatives who pick the nominee at the Democratic Party's July convention — are up for grabs.

The 78-year-old hit back at the charge his policies were too “radical,” insisting such ideas “exist in countries all over the world,” including the notion that health care is a human right.

“The way we beat Trump, which is what everybody up here wants, is we need a campaign of energy and excitement,” Sanders said.

“We need to bring working people back in to the Democratic Party.”

Talking over one another in often contentious exchanges, the seven candidates on stage aggressively vied for attention, locking horns on everything from housing to China policy and whether or not to move the US embassy from Jerusalem back to Tel Aviv.

Seeking to prove he is still in the fight, the 77-year-old Biden put in a spirited performance and snapped back at moderators who tried to cut him off, telling them: “I'm not going to be quiet anymore, OK?”The former vice president aimed a sharp attack at Sanders over gun control, an issue largely absent from previous debates, and a significant weakness for the Vermont senator who voted against legislation that would have allowed lawsuits against gun manufacturers.

Sanders had emerged largely unscathed from the previous debate. But he acknowledged he was now in the firing line, with rivals seeking to derail his push for the nomination following two straight victories, in New Hampshire and then Nevada.

“I'm hearing my name mentioned a little bit tonight,” he said to laughter. “I wonder why.”Piling on, Klobuchar hammered Sanders's plans as “broken promises that sound good on bumper stickers,” while billionaire activist Tom Steyer accused him of planning “a government takeover of large parts of the economy.”Like Buttigieg, Bloomberg sought to cast a Sanders nomination as a sure path to losing.

“Vladimir Putin thinks that Donald Trump should be president of the United States, and that's why Russia is helping you get elected so you'll lose to him,” the former New York mayor told Sanders in a heated opening exchange.

Bloomberg seeking to rebound from a disastrous performance last week in his first debate and prove he is a credible, moderate alternative to the leftist Sanders.

But the 78-year-old found himself under assault too, including by Warren who called him “the riskiest candidate” on stage.

“I don't care how much money mayor Bloomberg has. The core of the Democratic Party will never trust him,” Warren said. “He has not earned their trust. I will.”Bloomberg jumped late into the race, and has not been on the ballot in the four early states, opting instead to make a splash on Super Tuesday. He has now spent more than $500 million on campaign advertising.

Rival centrist Biden desperately needs a win after dismal showings in Iowa and New Hampshire, and a disappointing result in Nevada where he won 20.2 percent, well behind Sanders' 46.8 percent.

Biden has been counting on strong support among black voters in South Carolina to recharge his flagging campaign — earning cheers at one point when he promised to put a female black justice on the Supreme Court if elected.