Michael Avenatti, was arrested on Monday on charges of trying to extort more than USD 20 million from Nike. 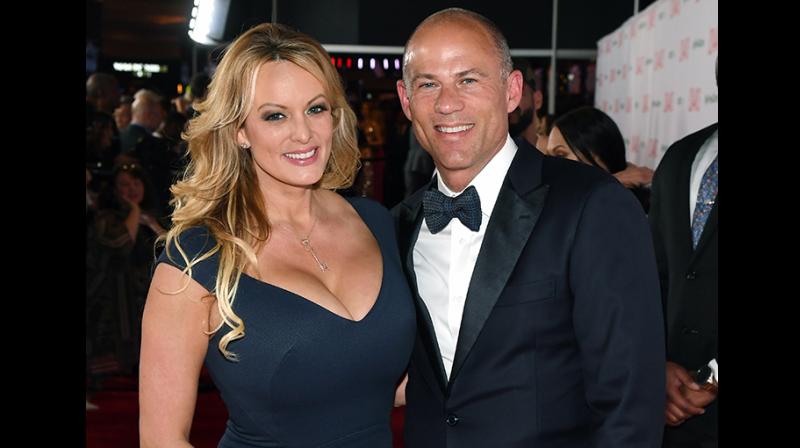 He accused Nike of being involved in a basketball bribery scandal and vowed to go public with his allegations. (Photo:AP)

Los Angeles: Michael Avenatti, who shot to fame as the lawyer of adult film star Stormy Daniels, was arrested on Monday on charges of trying to extort more than USD 20 million from Nike and for embezzling a client's money.

The celebrity attorney, who represented Daniels in her lawsuit against President Donald Trump, was arrested in New York based on separate complaints filed in that city as well as California.

He was due to be released later Monday following an initial court appearance and after signing a USD 300,000 personal recognizance bond. His travel was also restricted to California and New York.

According to the complaint filed in New York and involving the sports apparel giant, Avenatti devised a scheme to extort millions of dollars from Nike by threatening to damage the company's reputation right before its quarterly earnings and the start of the NCAA men's basketball tournament.

He accused Nike of being involved in a basketball bribery scandal and vowed to go public with his allegations unless the company agreed to multi-million dollar payments to him under the guise of legal work, authorities said.

"Calling this anticipated payout a retainer or a settlement doesn't change what it was -- a shakedown," New York federal prosecutor Geoffrey Berman told reporters.

The complaint states that Avenatti, 48, and a California-based lawyer known for representing celebrities approached Nike on March 19 with a list of financial demands.

The following day, in a telephone conversation with attorneys for Nike, Avenatti stated that if his demands were not met he would "take USD 10 billion off your client's market cap... I'm not fucking around," according to the complaint.

Authorities said he haggled with Nike attorneys over the amount he should be paid, finally telling them he would "ride off into the sunset" if he received USD 22.5 million.

Berman said his office launched a probe after being contacted by Nike.

Less than an hour before his arrest was announced, Avenatti tweeted that he would be holding a press conference Tuesday to "disclose a major high school/college basketball scandal perpetrated by @Nike that we have uncovered."

"This criminal conduct reaches the highest levels of Nike and involves some of the biggest names in college basketball," he added.

In a statement, Nike said it had reached out to federal officials after the initial meeting with Avenatti as it would not stand being extorted.

"Nike has been cooperating with the government's investigation into NCAA basketball for over a year," the statement said. "When Nike became aware of this matter, Nike immediately reported it to federal prosecutors."

Speaking to reporters after his court appearance in New York, Avenatti said he was confident he will "be fully exonerated and justice will be done."

"As all of you know, for the entirety of my career, I have fought against the powerful -- powerful pelople and powerful corporations," he said. "I will never stop fighting that good fight.

Avenatti -- who at one point entertained the possibility of running for president -- embezzled a client's money in order to pay his own expenses and debts and also defrauded a bank by using phony tax returns to obtain millions of dollars in loans, according to the two-count criminal complaint filed in California.

"The investigation paints an ugly picture of lawless conduct and greed," Nicola Hanna, the US attorney for the Central District of California, told reporters.

At odds with Avenatti's claim to be fighting for the most vulnerable, Hanna said a two-year probe conducted by his office paints a picture of "a corrupt lawyer who instead fights for his own selfish interests by misappropriating close to a million dollars that rightfully belong to one of his clients."

"Lawyers have a sworn duty to obey the law and protect their clients," Hanna said. "Mr Avenatti has breached that duty and violated the principles of honesty and fairness that he claims to uphold."

He said Avenatti, who is due to appear in a California federal court on April 1, faces up to 50 years in prison if found guilty in the case.

He faces up to 47 years in prison on the four extortion-related charges filed in New York.

Daniels -- who dropped Avenatti as her lawyer earlier this month -- reacted swiftly, saying in a tweet that while she was saddened by the news reports, she was not shocked.

"I made the decision more than a month ago to terminate Michael's services after discovering that he had dealt with me extremely dishonestly and there will be more announcements to come," she said.