The timing of the migrants arrival could compromise a flurry of talks this week to renegotiate the North American Free Trade Agreement. 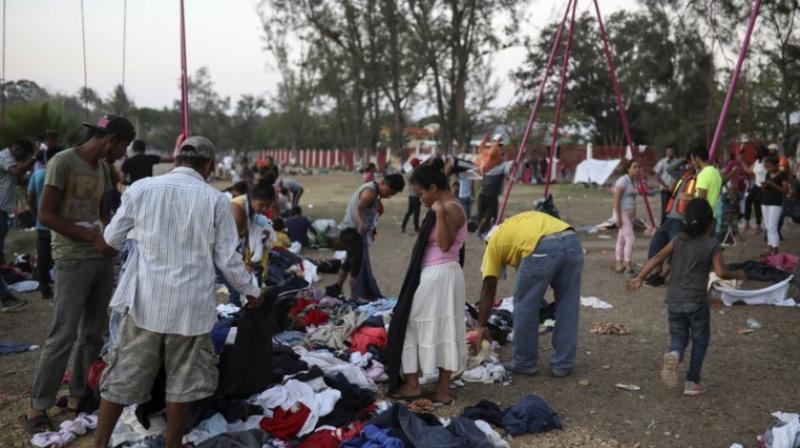 Migrants said they fled their homes in Guatemala, El Salvador and Honduras because of death threats from local gangs, the murder of family members or political persecution. (Photo: AP)

Tijuana, Mexico: Hundreds of Central American migrants from a caravan that crossed Mexico reunited in Tijuana on Wednesday and planned to cross the border together this weekend in defiance of threats by US President Donald Trump to repel them.

The timing of the migrants arrival could compromise a flurry of talks this week to renegotiate the North American Free Trade Agreement (NAFTA), which Trump has repeatedly threatened to scrap if Mexico does not crack down on the flow of Central Americans through its territory.

Busloads of migrants began arriving on Tuesday at a shelter that was a five minute-walk from the border and within sight of a US flag waving under an overpass connecting the two countries.

While many rested in tents after a month-long journey across Mexico, others wandered up to the border to contemplate the next stage in their journey.

"The wall doesn't look that tall," said Kimberly George, a 15-year-old girl from Honduras as she looked toward a stunted barrier a few feet away. "I really want to cross it."

Migrants said they fled their homes in Guatemala, El Salvador and Honduras because of death threats from local gangs, the murder of family members or political persecution.

Moving from town to town, the migrant caravan became a stumbling block for US-Mexico relations after Trump unleashed a series of tweets in early April, telling Mexican authorities to stop them.

More busloads of migrants arrived during the course of the day, overflowing the first shelter. Local migrant aid groups said it was the biggest single group they had seen arrive together as they scrambled to find places in ten shelters.

"Thanks to god we're here," said 34-year-old Aide Hernandez from Guatemala who had four children in tow. She said she planned to seek asylum in the United State. When asked why, she looked down, ashamed to detail a case of domestic abuse.

Volunteers from US-based advocacy group Pueblos Sin Fronteras, which organized the caravan, addressed the migrants to discuss a plan to cross together the main pedestrian bridge into the United States on Sunday.

Tensions flared after a Mexican immigration official suggested they go in smaller groups to the border station.

Ministers from Mexico, Canada and United States also met in the US capital as they rushed to seal a quick deal on updating NAFTA.

It was unclear if concerns about immigration could affect the talks. On Monday, Trump threatened to make immigration controls a condition in the NAFTA talks and demanded that Mexico stop people from crossing its territory to enter the United States.