World   Americas  26 Jul 2020  Portland's unbending protests reflect a leftist history but it too had a racist past
World, Americas

Historians point out that Oregon had, at one point, the highest per capita membership numbers for the famous Ku Klux Klan 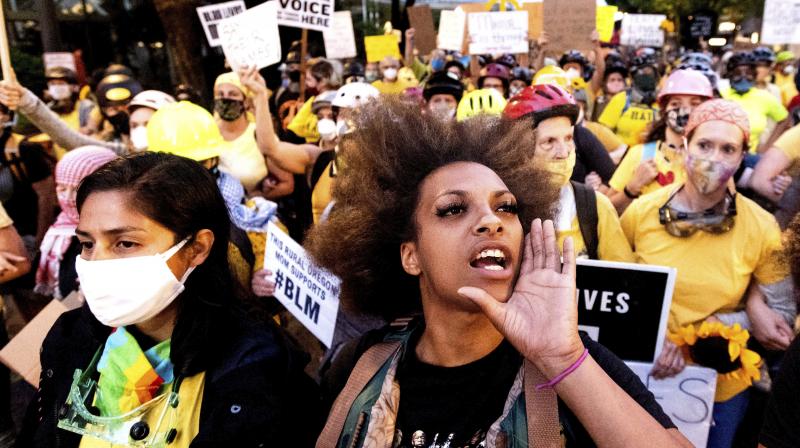 Los Angeles: For Portland, social conflict and street clashes are nothing new. The Oregon city has a long history of pro-labor militancy coupled with an anti-fascist culture and defiance of authorities -- but also, further back, a dark segregationist history.

So Portland, despite its small black population, was not entirely a surprising venue for the weeks of anti-racism protests that have drawn national attention, prompting President Donald Trump to send in federal agents in a highly controversial move.

Protesters have mobilized almost nightly since the death in Minneapolis of George Floyd, a black man, under the knee of a white police officer.

But the city of 650,000 began forging its reputation for far-left militancy years ago, during the ferment and unrest of the 1960s, much like Seattle to the north and San Francisco farther to the south.

And since the 2016 presidential election, the city has come to symbolize virulent opposition to Trump and his Republican Party.

"Anti-authoritarian leftist politics... have been present in Portland's true protest culture for the last 30 years or so," said Joe Lowndes, a political science professor at the University of Oregon.

The city earned the nickname of "Little Beirut," a reference to the years-long war in Lebanon, after then-President George H.W. Bush was met there with barricades, burning tires and hostile slogans.

"More recently, there's been a lot of kind of anti-fascist work which has been done on the streets of Portland," pushing back against far-right and white supremacist groups like the Proud Boys and Patriot Prayer, Lowndes said.

Protests and "violent attacks" on Portland residents by such far-right groups after Trump's political emergence in 2016, he added, spurred the development of "an active network of anti-fascist activists, who have grown over the last few years."

In November 2016, a demonstration against Trump's election degenerated into three days of rioting and clashes with police.

The emergence early this year of the COVID-19 pandemic initially helped restore calm on the streets.

But by then scenes of shaven-headed white supremacists and neo-Nazis clashing with hooded and black-garbed "antifa" anarchists had become commonplace.

"It is kind of a battleground for extremism," Lowndes said.

"Because Portland has gained this reputation as kind of liberal, radical (and) progressive, that draws people in who share those views, and it becomes ... almost a feedback loop," making the city ever more radical, said Steven Beda, a specialist in the region's history at the University of Oregon.

A mirror-image feedback loop in some rural parts of eastern Oregon, Beda said, attracted far-right militias and communities starting in the 1960s.

Despite Portland's current reputation as a leftist haven, the city and state were the product of fundamentally racist institutions, Beda pointed out.

The Ku Klux Klan "had a huge presence in Oregon in the 1920s. It actually had the highest per capita membership numbers... and there was a very, very close relationship throughout the 1920s between the political system and the Klan," he said.

As recently as 1926, local laws forbade black people from entering the state under pain of whipping -- a punishment to be repeated every six months if they remained.

A history of racism

Further fueling the recent tension is the long-strained relationship between some residents and Portland law enforcement, Lowndes said, which contributed to the locals' strong pushback against the federal agents sent by Trump into the city in recent weeks.

"The previous two or three years of protest policing in Portland have created a fracture with the community," said Michael German, a former FBI agent now with the Brennan Center for Justice, in New York.