Trump denounced clerical regime in Tehran for sowing 'chaos, death and destruction' as he defended his decision to ditch Iran nuclear deal. 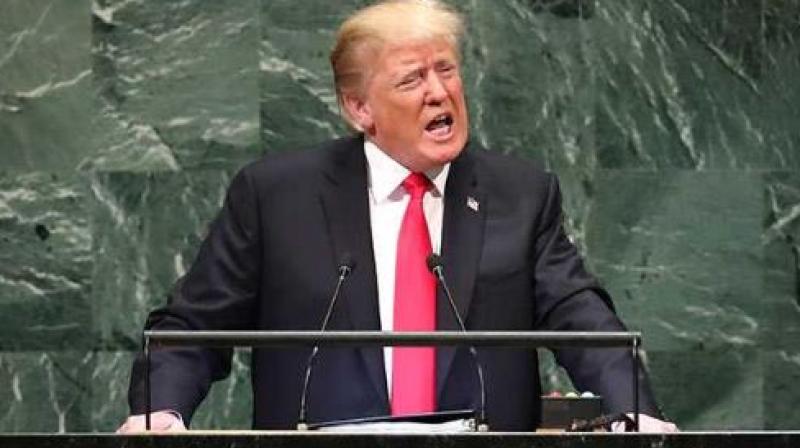 Since Trump came to power, promising that the world's most powerful country would follow an 'America First' foreign policy, there have been growing fears about the US commitment to multilateral institutions such as the United Nations. (Photo: AFP)

United Nations: President Donald Trump on Tuesday called for Iran's isolation while welcoming another former adversary, North Korea, in from the cold in an unabashedly boastful speech to the United Nations General Assembly which provoked laughter from fellow leaders.

Hours before Iranian President Hassan Rouhani was due to speak from the same rostrum, Trump denounced the clerical regime in Tehran for sowing "chaos, death and destruction" as he defended his decision to ditch an internationally brokered nuclear deal four months ago.

But after stunning the global body with his bellicose language on North Korea a year ago, including a threat to "totally destroy" Kim Jong Un's state, Trump instead praised his one-time arch enemy for his "courage" as he hailed progress in fragile peace efforts with Pyongyang.

Since Trump came to power, promising that the world's most powerful country would follow an "America First" foreign policy, there have been growing fears about the US commitment to multilateral institutions such as the United Nations.

In his speech at the opening of the assembly, UN Secretary General Antonio Guterres said trust in the rules-based global order and among states was "at a breaking point" and international cooperation becoming more difficult, without specifically mentioning Trump.

"Universal values are being eroded. Democratic principles are under siege," he added just minutes before Trump was to take the podium.

Trump however robustly attacked the "globalist" view of the world and vowed that "America will never apologize for protecting its citizens."

He said that the UN-backed International Criminal Court has "no jurisdiction, no legitimacy and no authority" and said that his administration -- which has recently choked off aid to the Palestinians -- would only support "our friends" in the future.

Boasting that his team "has achieved more than any administration in the history of our country," Trump was met with laughter, highly unusual in the solemn General Assembly.

"I didn't expect that reaction, but that's okay," Trump responded.

But the most closely watched passage of his speech came when he turned to Iran.

"We cannot allow the world's leading sponsor of terrorism to possess the planet's most dangerous weapons," Trump said, in an allusion to Tehran's support for Islamic militant movements such as Hamas and Hezbollah.

"We cannot allow a regime that chants 'Death to America' and that threatens Israel with annihilation, to possess the means to deliver a nuclear warhead to any city on Earth," he said.

"We ask all nations to isolate Iran's regime as long as its aggression continues."

Adversaries such as Rouhani will get their chance to respond later in the week-long meeting while traditional allies may also voice concerns.

In a sign of how some allies are unwilling to automatically follow Trump's lead, the five remaining parties to the Iran nuclear agreement -- Britain, China, France, Germany and Russia -- announced Monday plans to keep business ties alive with Iran, staring down Washington's move to impose sanctions.

And French President Emmanuel Macron used his speech at the assembly to urge "dialogue and multilateralism" on dealing with Iran, crediting the 2015 accord with curbing Tehran's nuclear program.

Trump withdrew from the nuclear deal in May, to the dismay of the other parties which had invested years in negotiations to achieve a milestone agreement on keeping Iran's nuclear ambitions in check.

In his address, the Iranian president is expected to stress that Tehran continues to stick to the deal and portray the United States as a pariah for breaking its international commitments.

Even though they will be speaking from the same stage, both Trump and Rouhani have ruled out a meeting on the sidelines of the assembly.

In a tweet on Tuesday morning, Trump said he had no plans to meet Rouhani "despite requests" to do so.

"Maybe someday in the future. I am sure he is an absolutely lovely man!" he said.

Rouhani has said he does not want to meet Trump. He told NBC News that the US leader must first repair the damage done by exiting the nuclear deal. "That bridge must be rebuilt," he said.

On Wednesday, Trump will for the first time chair a meeting of the Security Council on non-proliferation that will give him a fresh opportunity to make the case for a tougher international stance on Iran.

While he praised China's President Xi Jinping for his role in the North Korea peace process, Trump had harsh words for Beijing amid a growing trade war, saying the commercial imbalance with the Asian power "cannot be tolerated".

He also reserved harsh words for OPEC, the global oil cartel that includes both US allies and foes.

"OPEC and OPEC nations are, as usual, ripping off the rest of the world, and I don't like it. Nobody should like it."