The minister said today's security problems are not constrained by physical or political boundaries. 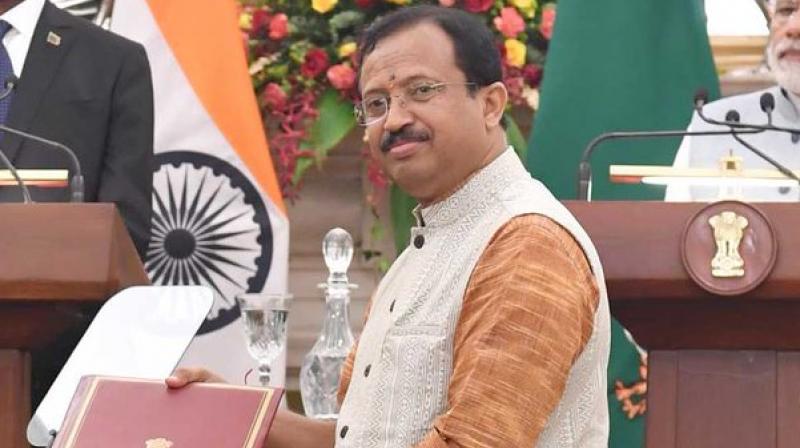 Minister of State for External Affairs V Muraleedharan called upon the international community to expeditiously adopt the Comprehensive Convention on International Terrorism (CCIT) "without any further delay". (Photo: Twitter)

United Nations: In an apparent reference to Pakistan, India has asserted that the global fight against terrorism should identify, hold accountable and take strong measures against states that finance and provide sanctuary to terrorists.

Addressing the UN Security Council Ministerial Debate on Wednesday, Minister of State for External Affairs V Muraleedharan called upon the international community to expeditiously adopt the Comprehensive Convention on International Terrorism (CCIT) "without any further delay".

The CCIT is a proposed treaty, which intends to criminalise all forms of international terrorism and deny terrorists, their financiers and supporters access to funds, arms and safe havens. "We believe that our fight against terrorism should not only seek to eliminate terrorists, and disrupt terror organisations and networks, but should also identify, hold accountable and take strong measures against states that encourage, support and finance terrorism, provide sanctuary to terrorists and terror groups," Muraleedharan said, without naming Pakistan.

The minister said today's security problems are not constrained by physical or political boundaries. Terrorism, drug trafficking, transnational crime and the security implications of new technologies are global challenges which cannot be viewed in compartmentalised terms.

"Our response to them therefore, also has to be coordinated across borders," he added. India had proposed a draft document in 1996 on CCIT at the United Nations but it remained a blueprint as the UN member states were unable to reach a consensus. With terrorism posing the single most significant threat to peace and stability today, Muraleedharan said, "We are confronted with groups that have linkages across regions and continents in terms of recruitment, financing, and operation. We are committed to combat this menace in all its forms and manifestations. There can be no justification for acts of terror on any grounds whatsoever."

He stressed that regional and sub-regional groups can also play an important role in fostering the cooperation and coordination needed to effectively combat terrorist networks. India, which is a member of the Shanghai Cooperation Organisation (SCO) since 2017, joined the regional grouping to secure peace, progress and prosperity and to create new opportunities for economic engagement in the region, the minister said.

The SCO is a China-led eight-member economic and security bloc. Its founding members include China, Russia, Kazakhstan, Kyrgyzstan, Tajikistan and Uzbekistan. India and Pakistan were admitted to the Beijing-based regional security grouping in 2017.

"We welcome the clarity shown by SCO on terrorism from its inception. We are determined to strengthen cooperation within the SCO framework for comprehensive, cooperative and sustainable security," Muraleedharan said. He also urged the SCO members to explore how the SCO-RATS (Regional Anti-Terrorism Structure) can provide a more effective platform for cooperation through exchange of information, capacity building, mutual legal assistance, sharing of best practices, and cooperating in multilateral fora such as the United Nations.

Last year, in her UN General Assembly address, the then External Affairs Minister Sushma Swaraj had said, "On the one hand, we want to fight terrorism; on the other, we cannot define it. This is why terrorists with a price on their head are celebrated, financed and armed as liberation heroes by a country that remains a member of the United Nations."