Ramirez and daughter Valeria were trying to cross into US after fleeing from El Salvador when they were swept into Rio Grande. 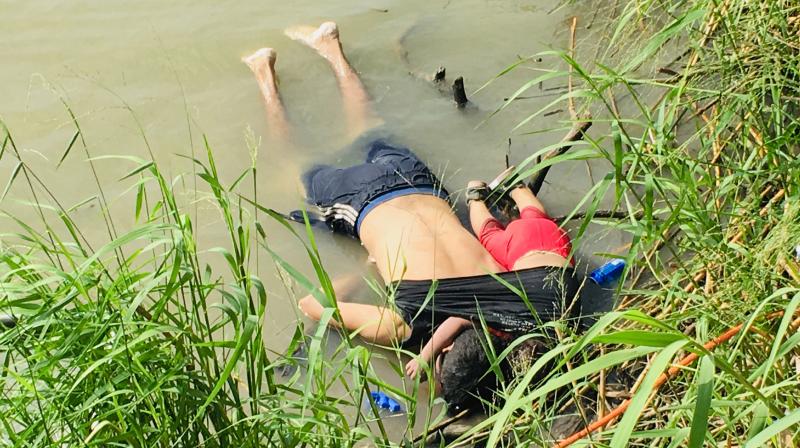 Speaking with reporters as he left the White House for a four-day trip to Asia, Trump said he was disturbed by the photos. (Photo: AP)

Washington: President Donald Trump on Wednesday blamed Democrats for the deaths of a migrant father and toddler girl whose bodies are depicted in searing photographs that have become a symbol of the perils faced by those trying to cross illegally into the US.

Speaking with reporters as he left the White House for a four-day trip to Asia, Trump said he was disturbed by the photos. But he said the deaths could have been prevented and castigated Democrats for failing to pass legislation he claimed would stop people from trying to make the dangerous trek.

“If we had the right laws, that the Democrats are not letting us have, those people, they wouldn’t be coming up. They wouldn’t be trying,” Trump said. “They can change it very easily so people don’t come up and people won’t get killed.”

Oscar Alberto Martinez Ramirez and daughter Valeria were trying to cross into the US after fleeing from El Salvador when they were swept into the Rio Grande.

The photos, captured by journalist Julia Le Duc and first published by Mexican newspaper La Jornada, show their bodies lying face-down near the riverbank. Her arm was draped around his neck, suggesting she clung to her father in their final moments.

“I hate it,” Trump said when asked about the image, “and I know it could stop immediately if the Democrats change the law. They have to change the laws. And then that father, who probably was this wonderful guy, with his daughter, things like that wouldn’t happen.”

Both the Senate and House has approved separate legislation to provide funding for the care for migrants streaming into the US, but the bills have yet to be merged and the next step is unclear. Congressional leaders hope to send Trump a compromise measure before lawmakers leave town for a July 4 recess.

From the scorching Sonora desert to the at-times fast-moving Rio Grande, the US-Mexico border can be a perilous setting for those who cross it illegally between ports of entry.

Two babies, a toddler and a woman were found dead on Sunday, overcome by the sweltering heat. Elsewhere, three children and an adult from Honduras died in April after their raft capsized on the Rio Grande, and a 6-year-old from India was found dead earlier this month in Arizona, where temperatures routinely soar well above 100 degrees Fahrenheit.