Trump tweeted Sunday that he won't be able to make the trip because of his 'strong focus on the coronavirus, vaccines and the economy 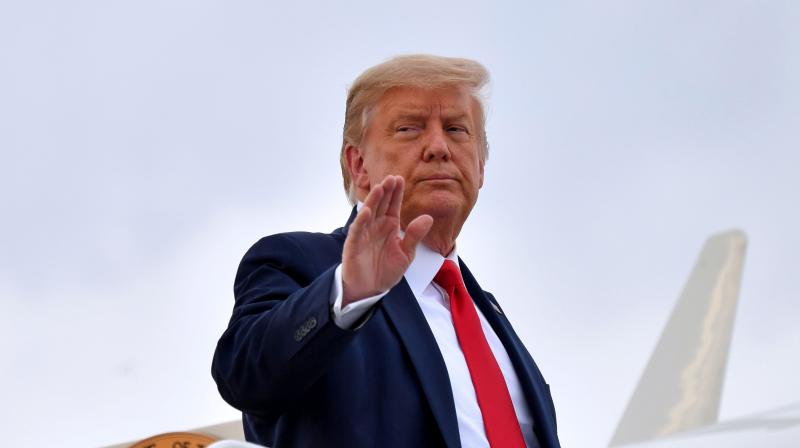 US President Donald Trump waves as he boards Air Force One prior to departing from Joint Base Andrews, Maryland. (AFP)

Washington: President Donald Trump won't be throwing out the first pitch at Yankee Stadium next month after all.

Trump tweeted Sunday that he won't be able to make the trip because of his strong focus on the coronavirus, vaccines and the economy.

Trump said in the tweet: We will make it later in the season!

He had announced at a briefing Thursday on Major League Baseball's opening day that he'd be at Yankee Stadium on August 15 to throw out the first pitch.

Trump has been trying to show voters that he is taking the virus seriously by holding briefings and cancelling Republican convention events set for Jacksonville, Florida. Florida is among several states where the virus is raging.

But on Saturday the White House tweeted a photo of Trump and former Green Bay Packers quarterback Brett Favre after the pair played golf at Trump's private club in Bedminster, New Jersey.

With the teams playing in stadiums that are largely empty, Trump wouldn't have had to contend with crowd reaction to his appearance, which has been an issue in some previous appearances at sporting events, where he has gotten a mixed response.

But another issue could have been tricky for Trump, who has been outspoken in his criticism of athletes taking a knee during the national anthem before games.

During an interview Thursday with Fox News' Sean Hannity, Trump again said he would be taking part in the longstanding tradition of throwing out the first pitch, but said he hoped that players would stand during the national anthem.

"It's great that baseball is back, and other sports are back. I hope everyone's standing; I hope they're not going to be kneeling when the flag is raised. I don't like to see that, Trump told Hannity.

Some New York City politicians, including Mayor Bill de Blasio and Bronx Borough President Ruben Diaz Jr, have complained loudly about Trump throwing out a first pitch for the Yankees.