Rejected meeting with Trudeau at UNGA over trade fight: Trump

Trump vented his frustration with Canada along sidelines of UNGA, latest sign of deteriorating ties between two allies. 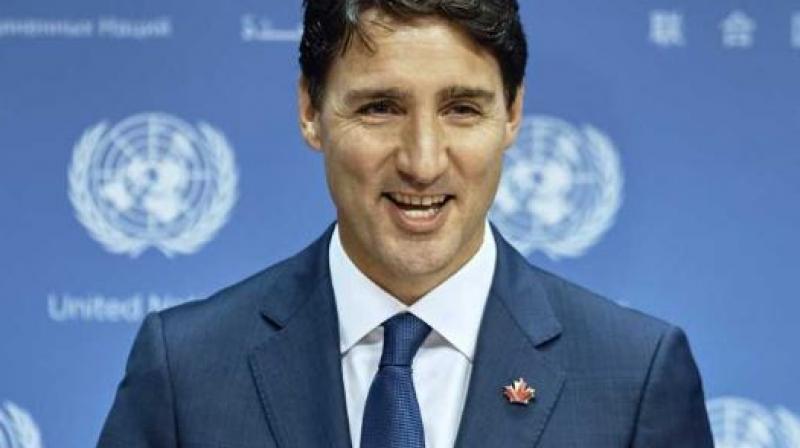 Trudeau spokeswoman Eleanore Catenaro said in response: 'No meeting was requested. We don't have any comment beyond that.' (Photo: PTI)

Washington: President Donald Trump said Wednesday that he rejected a one-on-one meeting with Canadian Prime Minister Justin Trudeau over the trade dispute involving the North American neighbours and renewed his threat to slap tariffs on cars imported from Canada as negotiations drag on.

Trudeau spokeswoman Eleanore Catenaro said in response: "No meeting was requested. We don't have any comment beyond that."

In an extraordinary rebuke of America's northern neighbour, Trump vented his frustration with Canada during a news conference along the sidelines of the United Nations General Assembly, the latest sign of deteriorating relations between two allies who share a border.

"His tariffs are too high and he doesn't seem to want to move and I've told him forget about it," Trump said of Trudeau. "And frankly, we're thinking about just taxing cars coming in from Canada. That's the mother lode. That's the big one."

"We've very unhappy with the negotiations and the negotiating style of Canada. We don't like their representative very much," Trump said in an apparent reference to Canada's Minister of Foreign Affairs Chrystia Freeland, who has been negotiating with US Trade Representative Robert Lighthizer.

Canada, the United States' No. 2 trading partner, was left out when the US and Mexico reached an agreement last month to revamp the North American Free Trade Agreement. The US and Canada are under pressure to reach a deal by the end of the month, when Lighthizer must make public the full text of the agreement with Mexico.

But Trump suggested he may go forward with a revamped NAFTA without Canada. The president said it would be called "USM," for the US and Mexico, instead of "USMC," and offered blunt criticism of the Canadian team engaged in the talks.

"Canada has a long way to go. I must be honest with you, we're not getting along at all with their negotiators. We think their negotiators have taken advantage of our country for a long time," he said.

Any push by Trump to slap a 25 per cent tariff on imported autos and auto parts from Canada might help American workers but could also inflate car prices, make US manufacturers less competitive and generate retaliation.

Roughly four in five cars assembled in Canada are exported. The Canadian Automobile Dealers Association has warned that the auto tariffs could affect billions of dollars' worth of exports and lead to the loss of more than 100,000 jobs across the country.

Relations between the two neighbours have been strained since Trump assailed Trudeau at the G-7 meeting in June, calling him a "weak" and "dishonest" back-stabber. Canadian leaders have objected to Trump's decision to impose tariffs on Canadian steel, citing national security.

The trade talks have been deadlocked over issues such as Canada's high dairy tariffs and US efforts to shield drug companies from generic competition. Trump, during the news conference, reiterated his longstanding grievances against NAFTA and job losses, saying the trade pact had been "great for Canada, great for Mexico, very bad for us."

The trade agreement, which took effect in 1994, removed most trade barriers between the US, Canada and Mexico, leading to a boost in trade, but it encouraged US automakers and other manufacturers to move south of the border to take advantage of low-wage Mexican labour.