'If you'll just bear with me a second,' Prez said, pulling out a phone, lifting it up to his grinning face and snapping a photo. 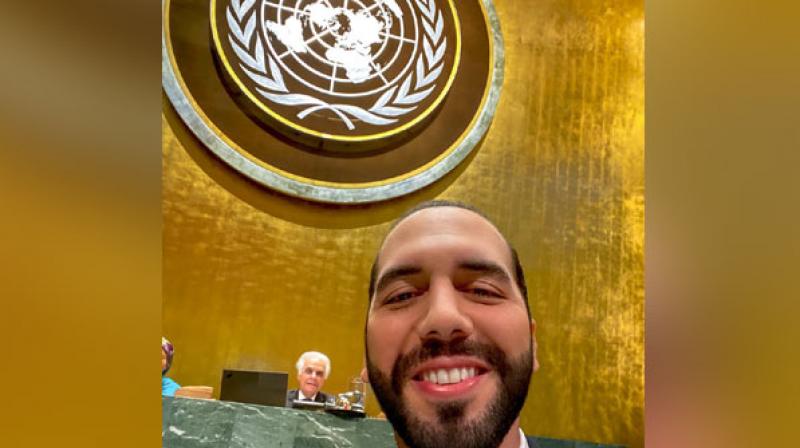 Earlier on Wednesday, he held his first meeting with US President. (Photo: Twitter)

New York: Before making his maiden speech at the United Nations General Assembly (UNGA) on Thursday, El Salvador's President Nayib Bukele made use of the opportunity to click a selfie, much to the surprise of other attendees.

"If you'll just bear with me a second," he said, pulling out a phone, lifting it up to his grinning face and snapping a photo, which he later posted on Twitter to his 1.1 million followers, reported South China Morning Post.

He also took a dig at the conference of the world leaders at the UN headquarters and said, "Believe me, many more people will see that selfie when I share it than will listen to this speech - I hope I took a good one".

Quipping that the annual summit of the world's leaders could be done by video conference, he added, "A couple of images on Instagram can have more impact than any speech delivered in this assembly."

He was sworn into office in June in the small Central American country of 6.6 million people, tasked with turning around grinding poverty and rampant gang violence that are sending thousands fleeing to the United States.

The former mayor of the capital, San Salvador, is a prolific user of social media.

Earlier on Wednesday, he held his first meeting with US President.

"For us, the United States is not only a partner and an ally, but also a friend," Bukele told reporters after that meeting.

"We're hoping that this meeting will only strengthen our relationship even more, and I think it will because, you know, President Trump is very nice and cool, and I'm nice and cool, too. We both use Twitter a lot, so, you know, we'll get along," he had told reporters.