'Harmony and peace is our message, not dissension ': PM Narendra Modi at UNGA

'I am delighted to inform you that we are running a big campaign in India to free the country of single use plastic,' he also said. 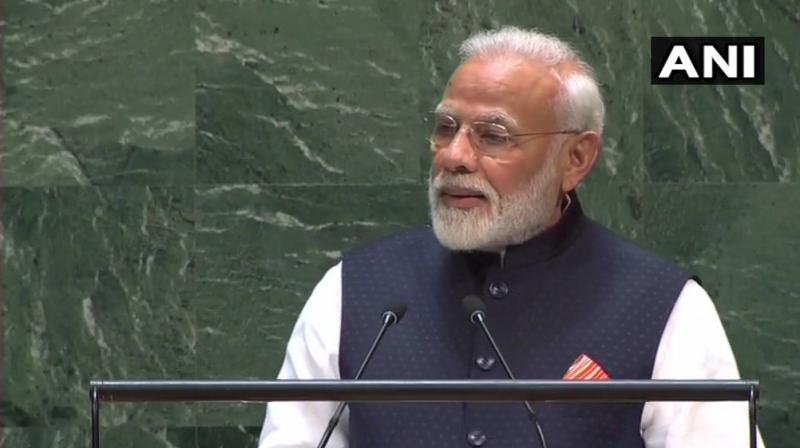 PM Modi began his speech by saying, "This year, the world’s biggest democracy held the world’s biggest election in which the people of the country voted for me and my government because of which I got the opportunity to be here," the Prime Minister said as he began his address at the 74th UNGA session.

PM Modi's remark in the ban on single use plastic was very well received and get a huge round of applause from those gathered there.

He also added, "When a developing nation successfully carries out the biggest cleanliness drive of the world and provides more than 11 crore toilets to its people just within 5 years, that system gives a message of inspiration to the entire world."

Prime Minister Narendra Modi in his UNGA speech said that the country is committed to eradicating Tuberculosis by 2025, while noting that the dateline is five years ahead of that set by the United Nations under its sustainable development goals.

He also said that our motto is “sabka sath, sabka vikas”. “When I look at other countries like India that are working and heading towards development, my resolution “our efforts, results for everyone,” becomes even stronger," PM Modi said in New York.

Coming to one of the persistent topic of the PM's visit he said, "We believe that terrorism is not a challenge for any one country, but for all countries and of mankind as a whole. So for the sake of humanity, all the world has to unite against terror."

PM Modi also said, "Hum uss desh ke vaasi hain jisne dunia ko yuddh nahi Buddh diye hain, shanti ka sandesh diya hai. (We are from a country that has given people like Buddha to the world and not war. We have always given the message of peace)".

“Harmony and peace not dissension is our message,” Prime Minister Narendra Modi said in his UNGA address.

The 69th session of the UNGA had witnessed the Indian Prime Minister calling for the early adaptation of the Comprehensive Convention on Global Terrorism, highlighting that it was a matter that had been pending for long. He had made it clear that India wanted to pursue bilateral talks with Pakistan in an environment of peace, free from the shadow of terror.