Ethnic communities, who face human rights atrocities under Pak govt and ISI, urged him to highlight their plight on international platform. 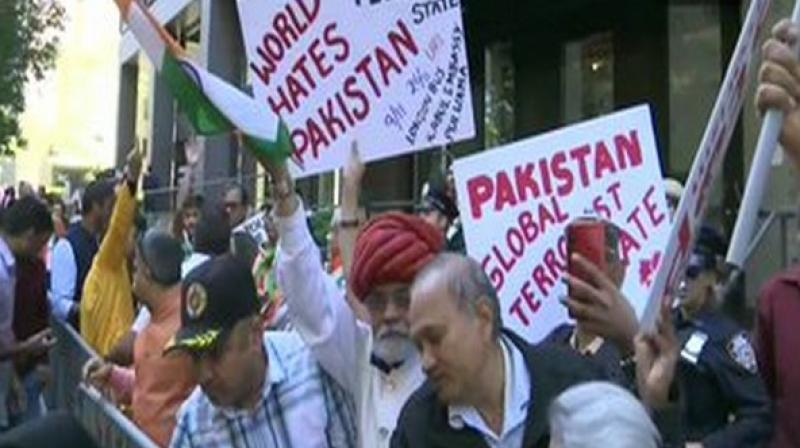 The Kashmiri Pandits also made their presence felt at the mega Howdy Modi! event, by holding up posters praising the PM for the abrogation of Article 370 and wearing saffron shirts. (Photo: ANI)

New York: A large group of Kashmiri Pandits, ethnic and religious minorities like Balochs, Mohajirs and Sindhis have gathered outside the UN headquarters in support of Prime Minister Narendra Modi who is supposed to address the 74th session of the UN General Assembly in a short while from now.

The Prime Minister had previously met the Kashmiri Pandit community upon reaching Houston on Saturday. The group had lauded Modi for the revocation of Article 370 which accorded a special status to Jammu and Kashmir. The leader, in return, acknowledged the hardships faced by the community and promised to build a new Kashmir.

The Kashmiri Pandits also made their presence felt at the mega Howdy Modi! event, by holding up posters praising the PM for the abrogation of Article 370 and wearing saffron shirts.

The ethnic communities, who face human rights atrocities at the hands of the Pakistani government and intelligence agency, have urged Modi to highlight their plight on the international platform.

This will be the Prime Minister's maiden speech at the UNGA after assuming power for the second term. The government had earlier said that the leader would refrain from speaking on Kashmir, in line with the view that it is a matter of India's internal affairs.

Despite being snubbed by the world community, Pakistan has vowed to raise the topic at the global body when its Prime Minister Imran Khan takes to the dais shortly after Modi.