Only Turkey recognises northern Turkish Republic of Northern Cyprus, while Republic of Cyprus is accepted by world community. 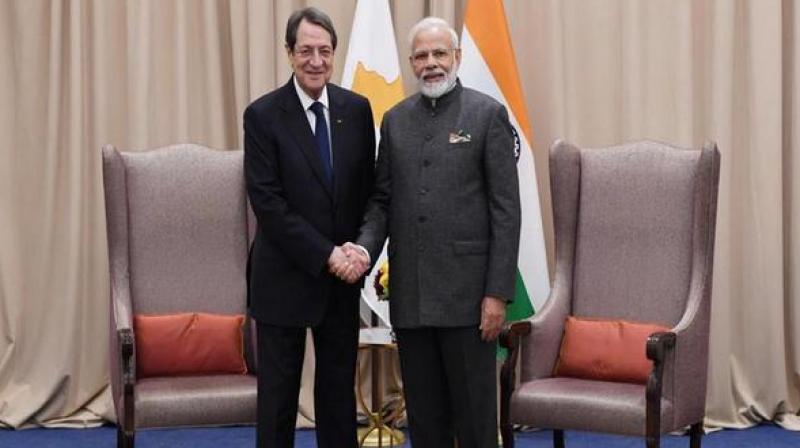 Both Modi and Anastasiades discussed the broad spectrum of bilateral relations, pursuant to the State visit of the President of India to Cyprus in September 2018. (Photo: ANI)

The Prime Minister asserted India's support during a meeting with Cyprus President Nicos Anastasiades on the sidelines of the 74th sessions of the United Nations General Assembly on Thursday.

The Cyprus island has been divided since 1974 into two regions when Turkey launched an invasion in response to a Greek nationalist coup. A large Turkish military's presence has remained on the island since then.

Only Turkey recognises the northern Turkish Republic of Northern Cyprus, while the Republic of Cyprus has been accepted by the world community.

A succession of talks to reunite the island has failed over disagreements on core issues including the readjustment of territory.

Both the leaders discussed the broad spectrum of bilateral relations, pursuant to the State visit of the President of India to Cyprus in September 2018.

The two leaders stressed the need to enhance the volume of bilateral trade and investment given the considerable potential and strengths of the two economies.

The Prime Minister thanked the Government of Cyprus for its support to India's candidature for the UNSC's permanent membership in an expanded Security Council, NSG and other international platforms.