US warns Pak: Act against Saeed, or face repercussions

White House press secretary Sarah Sanders said that the US strongly condemns the release of the Lashkar-e-Tayyaba leader from house arrest. 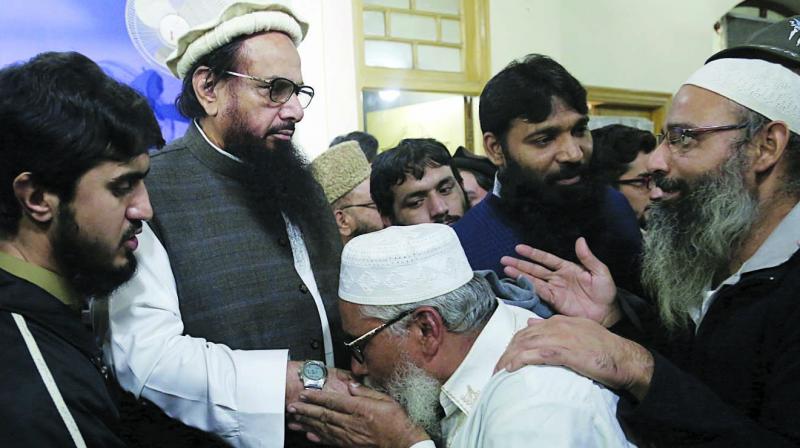 Supporters of Hafiz Saeed (second from left), head of Jamaat-ud-Dawa, kiss his hands as he arrives after his release at a mosque in Lahore. (Photo: AP)

Washington: The US has demanded the immediate re-arrest and prosecution of Mumbai terror attack mastermind Hafiz Saeed, warning Islamabad that there would be “repercussions” for bilateral ties if it fails to take “decisive action” against the notorious terrorist.

The banned Jamaat-ud-Dawah (JuD) head, who carries a $10 million American bounty on his head for terror activities, walked free on Friday after the Pakistan government decided against detaining him further. He was under house arrest since January.

In a strongly worded statement, White House press secretary Sarah Sanders said on Saturday that the US strongly condemns the release of the Lashkar-e-Tayyaba leader from house arrest and calls for his immediate re-arrest and prosecution.

“If Pakistan does not take action to lawfully detain Saeed and charge him for his crimes, its inaction will have repercussions for bilateral relations and for Pakistan’s global reputation,” Ms Sanders said, reflecting the Trump administration’s outrage at Saeed’s release.

She said Saeed’s release, after Pakistan’s failure to prosecute or charge him, sends a “deeply troubling message” about Pakistan’s commitment to combating international terrorism and “belies Pakistani claims” that it will not provide sanctuary for terrorists on its soil. “The release of Saeed is a step in the wrong direction,” she said.

She said the Pakistani government now “has an opportunity to demonstrate its seriousness in confronting all forms of terrorism, without distinction, by arresting and charging Hafiz Saeed for his crimes”. Saeed is a notorious terrorist who is accused of having masterminded the November 2008 Mumbai attack that killed 166 people.