US backtracks on plan of imposing 20 per cent tariff on imports from Mexico. 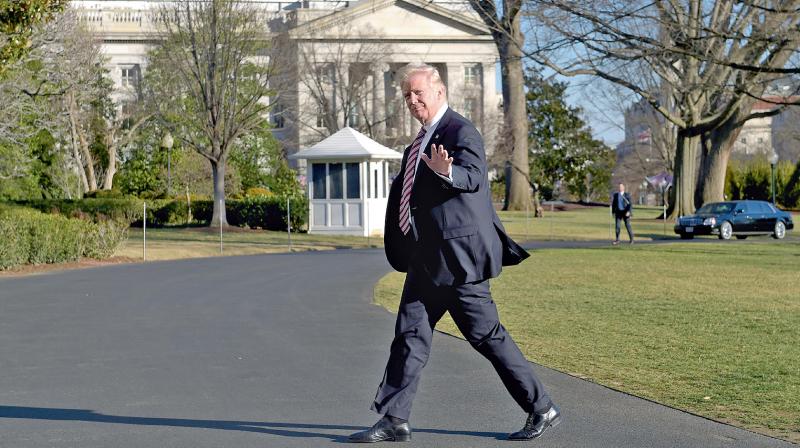 US President Donald Trump at the South Lawn of the White House in Washington. (Photo: AP)

Washington: The White House on Thursday floated the idea of a 20 per cent tax on Mexican imports to pay for United States President Donald Trump’s border wall before quickly backtracking and calling it just one idea among many.

Mr Trump has vowed to “make Mexico pay” for the wall — something Mexico has strongly rejected — but, until today, given little indication of how that would be done. The financing of the project, which is aimed at clamping down on illegal immigration, has sparked tensions between the two countries.

Mexican President Enrique Pena Nieto on Thursday called off a meeting with Mr Trump set for next week in Washington. With a war of words escalating, and Congress moving to meet the $12-15 billion price tag though taxpayer dollars, White House press secretary Sean Spicer indicated tariffs on Mexico would be used to claw back the cash.

“It clearly provides the funding and does so in a way that the American taxpayer is wholly respected,” Mr Spicer said, adding that lawmakers had considered the proposal in the context of broader tax reform.

But the suggestion was met with fierce blowback. “When you look at tariffs and repercussions you get from countries that you use your tariffs against, there is always the potential response for retaliation, which normally doesn’t support good economic growth,” said Republican Congressman Mark Meadows.

Senator Lindsay Graham was a little more colourful. “Any policy proposal which drives up costs of Corona, tequila, or margaritas is a big-time bad idea. Mucho Sad,” he tweeted.

Hours later Mr Spicer was forced to row back the idea, saying it was just a hypothetical, one of many options.

“The idea today wasn’t to roll anything out or be prescriptive or announce anything, it was to say it’s actually not that hard to do,” Mr Spicer said.

“The idea is to show that generating revenue for the wall is not as difficult as some might have suggested, one measure alone could do this.” He said the proposal need not provoke a trade war.  “You can do things in a very WTO-compliant way,” he said. “Hypothetically there are several ways you could do that and be compliant.”