What it does: $1200 cash transfer to every American, higher jobless dole and more funds for health care 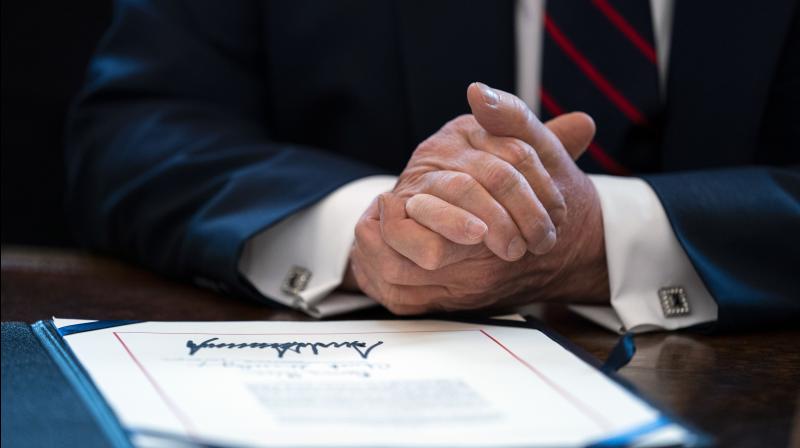 US president Donald Trump signed the coronavirus stimulus relief package at the White House on March 27, 2020, in Washington. (AP)

This followed swift and near-unanimous action by Congress to rush the legislation, which aims to support businesses, rush resources to overburdened health care providers and help struggling families during the deepening coronavirus epidemic.

“This will deliver urgently needed relief," Trump said as he signed the bill in the Oval Office, flanked only by Republican lawmakers. He thanked members of both parties for putting Americans "first."

Earlier Friday, the House gave near-unanimous approval by voice vote after an impassioned session conducted along the social distancing guidelines imposed by the crisis. Many lawmakers sped to Washington to participate --their numbers swollen after a maverick Republican signaled he'd try to force a roll call vote--though dozens of others remained safely in their home districts.

The $2.2 trillion legislation will speed government payments of $1,200 to most Americans and increase jobless benefits for millions of people thrown out of work. Businesses big and small will get loans, grants and tax breaks. It will send unprecedented billions to states and local governments, and the nation's all but overwhelmed health care system.

Despite reservations, arch-conservatives joined with progressives like Alexandria Ocasio-Cortez to back the bill, which moved quickly through a Congress that's been battered by partisanship.

“I'm going to have to vote for something that has things in it that break my heart,'' said conservative Rep. David Schweikert.

The bipartisan amity went only so far. Top congressional Democrats were not invited to the White House signing ceremony, said Democratic aides speaking on condition of anonymity to describe the situation.