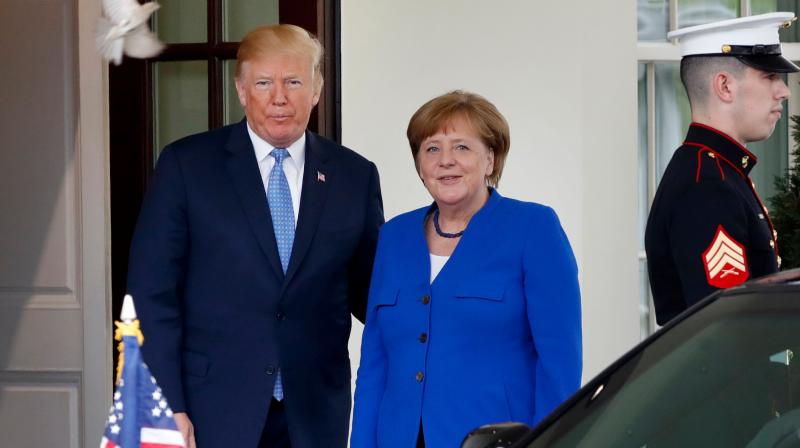 President Donald Trump shakes hands with German Chancellor Angela Merkel at the end of their news conference in the East Room of the White House, Friday. (Photo: AP)

Washington: Accusing Iran of fuelling bloodshed in the Middle East, President Donald Trump on Friday said the US would not let "murderous regime" in Tehran acquire nuclear weapons.

"We must ensure that this murderous regime does not even get close to a nuclear weapon, and that Iran ends its proliferation of dangerous missiles, and its support for terrorism. No matter where you go in the Middle East, wherever there's a problem, Iran is right there," he said.

Trump was addressing a joint White House news conference with the visiting German Chancellor Angela Merkel. The two leaders had discussed the current situation in Iran and its alleged "destabilisng behavior".

"In our meetings today, the Chancellor and I discussed Iran, the Iranian regime that fuels violence, bloodshed and chaos all across the Middle East," Trump said.

He said it was not "appropriate" to talk on whether the US may consider the use of military force against Iran.

He said as the US-led international alliance is about to eradicates ISIS in Syria, it must be ensured that "Iran does not profit from this success". "To prevent this outcome, it is essential that our coalition and regional partners step up their financial and military contributions to the anti-ISIS efforts. Some of these countries are immensely wealthy; and they're going to start paying for it, and paying for this tremendous help that we've given them," the US President said.

Merkel said the Joint Comprehensive Plan of Action (JCPOA), as a first step, has contributed to slowing down Iran's activities with regard to acquiring nuclear weapons.

"But we also think, from a German point of perspective, that this is not sufficient in order to see to it that Iran's ambitions are curbed and are contained. It is most important to see that Iran, after all is trying to insert a geopolitical influence in Syria, in Lebanon," she asserted.

Merkel acknowledged that the Iranian nuclear deal is unlikely to resolve problems.

"Obviously, this agreement is anything but perfect. It will not solve all the problems with Iran," she said.

"It is one piece of the mosaic, one building block, if you like, on which we can build up this structure; and that when the United Kingdom, France and Germany work together with the American colleagues, this was brought about, and then we will now see what sort of decisions are made by American partners," Merkel said.