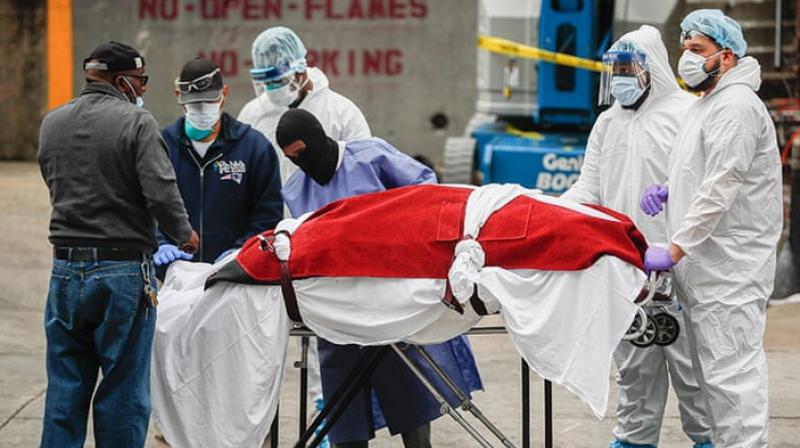 A body wrapped in plastic that was unloaded from a refrigerated truck is handled by medical workers wearing personal protective equipment at Brooklyn Hospital Center in New York City. (AP)

New York: A total of 337 people died of the coronavirus in New York on Monday, state Governor Andrew Cuomo has said, the lowest number of fatalities in almost a month in America's COVID-19 epicentre.

New Jersey Governor Philip Murphy reported 106 deaths on Monday, and according to a report in The New York Times, the one-day death tolls were less than half of what the two states reported at their peaks.

As the states showed progress in fighting the deadly contagion, Cuomo and Murphy have begun to offer details on reopening in the months ahead.
Cuomo has said that after May 15, when his order shutting down New York is set to expire, businesses in what he called low-risk industries like construction and manufacturing might begin to reopen in parts of the state that have been less affected, the NYT reported. However, the shutdown order will be extended beyond May 15 in many parts of New York.

In a radio interview, Cuomo said that he hoped to decide this week whether New York schools would reopen before the end of the school year. He said that he would coordinate with Murphy and Governor Ned Lamont of Connecticut on the decision, as well as on whether summer schools would be held in the three states.

Murphy said that coordination between New York and New Jersey would probably be closest in the extended New York City metropolitan area, where the virus has hit with particular force.

Murphy further said that before he would consider reopening businesses and schools, he would need to see a prolonged decline in hospitalisation and infection rates, expanded testing and contact tracing, and more places where virus patients can recover in isolation, the NYT report said. In a hopeful note, he said schools might reopen before the end of June.