Putin says Trump can 'be my guest' in Moscow, WH welcomes idea

Russia is under punitive sanctions imposed by the United States and the European Union and wants them lifted. 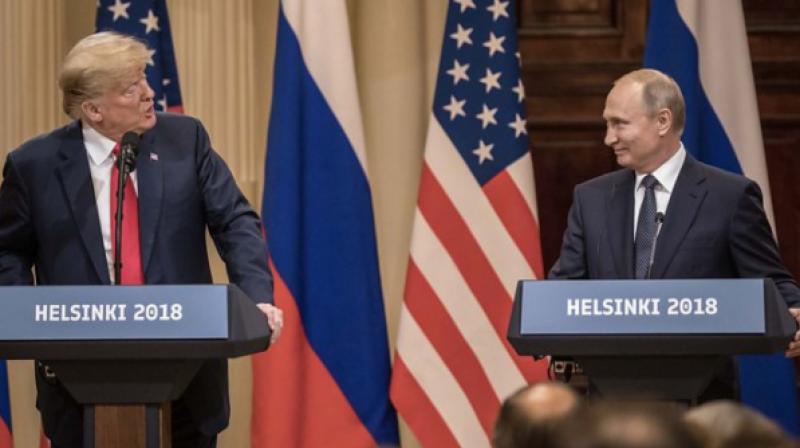 The White House said no agreements were reached in the one-on-one meeting with Putin other than having national security teams meet. (Photo: AP | File)

Washington/Johannesburg: Russian President Vladimir Putin said on Friday he wanted US President Donald Trump to be his guest in Moscow, an idea that the White House welcomed despite lingering criticism over the Helsinki summit.

The Russian leader said on a visit to South Africa for an economic conference that "appropriate conditions" were required in both countries for another summit to take place, an apparent reference to a political uproar in the United States last week after the two men met.

The White House said Trump was enthusiastic about another summit. Trump has said he wants to improve ties between the two nuclear powers, whose relations have dipped to a post-Cold War low in recent years.

"President Trump looks forward to having President Putin to Washington after the first of the year, and he is open to visiting Moscow upon receiving a formal invitation," White House spokeswoman Sarah Sanders said in a statement.

Separately, US Secretary of Defence Jim Mattis said he was considering the possibility of the first talks in years between the defence chiefs of the United States and Russia. Mattis said there had been no decision.

Trump was criticized at home for failing to confront Putin publicly over Moscow's interference in the 2016 US election, and for seeming to contradict his own intelligence agencies on the threat from Russia. Trump has defended his conduct.

The White House said no agreements were reached in the one-on-one meeting with Putin other than having national security teams meet. No policy changes came out of the summit, Mattis said on Friday, adding he had also not been given new direction on Syria.

Moscow's military support starting in 2015 of Syrian President Bashar al-Assad in the Syrian war, Russia's 2014 annexation of Crimea from Ukraine and the conclusions of US intelligence agencies that Russia meddled in the election have soured relations.

Russia is under punitive sanctions imposed by the United States and the European Union and wants them lifted.

Putin told reporters on Friday: "We need for the appropriate conditions to exist, to be created, including in our countries" for more US-Russia summits.

Putin went on to say Russia was ready to greet Trump in Moscow. "Be my guest. He has such an invitation, I told him that."

Following the backlash in the United States over Trump's cordial public tone with Putin in Helsinki, US and Russian officials backed away from Trump's proposal to schedule a follow-up meeting in Washington in the fall.

The White House on Wednesday postponed that invitation until next year, when a federal investigation of Russian election interference could be finished.

The last time Trump was in the Russian capital was as a private citizen in 2013 to attend a Miss Universe beauty pageant. That visit surfaced in the FBI investigation of Russian election activities in the form of a dossier containing allegations that Trump had spent time with Russian prostitutes there. Trump has denied the allegations.

Efforts by both Trump and Putin to achieve detente have been fiercely resisted by US lawmakers, including some in Trump's own Republican Party, accusing him of being too friendly toward Putin, whom they consider an adversary of the United States.

Trump, whose advisers have warned him Russia continues its interference in the run-up to congressional elections in November, met with his national security aides on Friday to discuss election security.

Trump has repeatedly denied his campaign colluded with Russia and has characterized the investigation by Special Counsel Robert Mueller as a witch hunt. Trump is infuriated by any suggestion he might owe his election victory to Russia.

Trump on Friday denied knowing in advance about a 2016 meeting his son Donald Trump Jr and other campaign staff had at Trump Tower with a group of Russians who offered damaging information on Clinton. A CNN report said his longtime lawyer Michael Cohen planned to tell Mueller that Trump did know of the meeting.