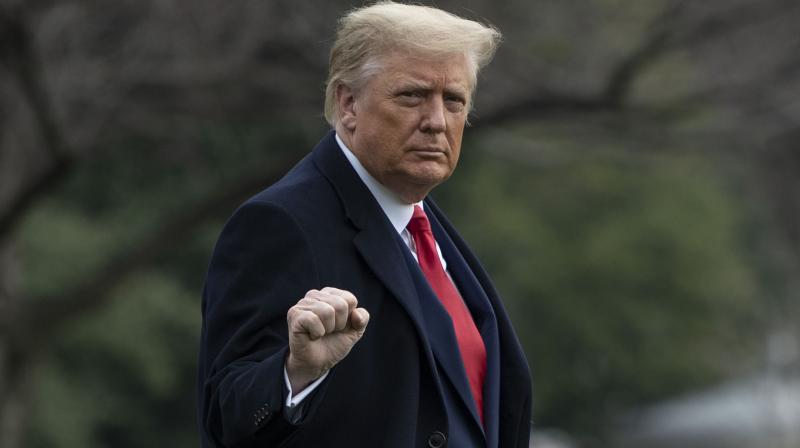 After nearly a week's delay and under pressure from all sides, President Donald Trump signed a $900 billion Covid-19 relief bill December 27, the White House said, extending benefits to millions of Americans struggling through the pandemic. The package "providing coronavirus emergency response and relief" is part of a larger spending bill that, with Trump's signature, will avoid a government shutdown. (AFP)

Washington: US President Donald Trump has signed into law a massive USD 2.3 trillion spending bill that includes a USD 900 billion coronavirus relief package, averting a government shutdown and extending coronavirus aid to millions suffering from the economic impact of the pandemic.

Trump initially refused to approve the legislation for days after receiving it. He had called the bill "a disgrace".

It was not immediately clear why Trump, who leaves office on January 20, finally decided to sign the bill into law. He had been under growing pressure from both sides of Congress to sign the bill.

"I am signing this bill to restore unemployment benefits, stop evictions, provide rental assistance, add money for PPP, return our airline workers back to work, add substantially more money for vaccine distribution, and much more," Trump said in a statement.

His signature avoids a partial government shutdown, as spending was set to run out Tuesday.

Among its many provisions, the coronavirus relief package includes direct payments to qualifying Americans, worth up to USD 600 per adult and child; a boost in weekly unemployment benefits; and funds for small-business aid and vaccine distribution.

In the statement, Trump said that as president it is his responsibility to protect the people of our country from the economic devastation and hardship that was caused by the "China virus".

"I understand that many small businesses have been forced to close as a result of harsh actions by Democrat-run states. Many people are back to work, but my job is not done until everyone is back to work," he said.

Trump also indicated his continued objections to the bill and insisted that he was pushing for the USD 2,000 payment per American.

"On Monday the House will vote to increase payments to individuals from USD 600 to USD 2,000. Therefore, a family of four would receive USD 5,200. Additionally, Congress has promised that Section 230, which so unfairly benefits Big Tech at the expense of the American people, will be reviewed and either be terminated or substantially reformed," Trump said.

Likewise, the House and Senate have agreed to focus strongly on the very substantial voter fraud which took place in the November 3 Presidential election, he said.

"Fortunately, as a result of my work with Congress in passing the CARES Act earlier this year, we avoided another Great Depression. Under my leadership, Project Warp Speed has been a tremendous success, my Administration and I developed a vaccine many years ahead of wildest expectations, and we are distributing these vaccines, and others soon coming, to millions of people," he said.

"As president, I have told Congress that I want far less wasteful spending and more money going to the American people in the form of USD2,000 cheques per adult and USD600 per child," he insisted.

Trump's signing of the bill comes as the pandemic accelerates in the country. The US currently has a total of 19.1 million confirmed cases of coronavirus, according to Johns Hopkins University. More than 333,110 Americans have already died due to the virus.

Speaker Nancy Pelosi in a statement said that the signing of the bipartisan, bicameral coronavirus relief legislation is welcome news for the fourteen million Americans who just lost the lifeline of unemployment benefits on Christmas weekend, and for the millions more struggling to stay afloat during this historic pandemic and economic crisis.

"This relief legislation is a down payment on what is needed to crush the virus, put money in the pockets of the American people and honour our heroes, our health care workers, first responders, transit and sanitation workers and teachers. We need to ensure robust support for state and local government to distribute and administer a vaccine, keep workers employed and prevent devastating service cuts and we must do so as soon as possible," Pelosi said.

Now, the President must immediately call on Congressional Republicans to end their obstruction and to join him and Democrats in support of our stand-alone legislation to increase direct payment cheques to USD 2,000, which will be brought to the Floor Monday, she said.

"Every Republican vote against this bill is a vote to deny the financial hardship that families face and to deny the American people the relief they need," Pelosi said.