The move came after Trump tweeted that "when the looting starts, the shooting starts" in reference to the ongoing unrest in Minneapolis 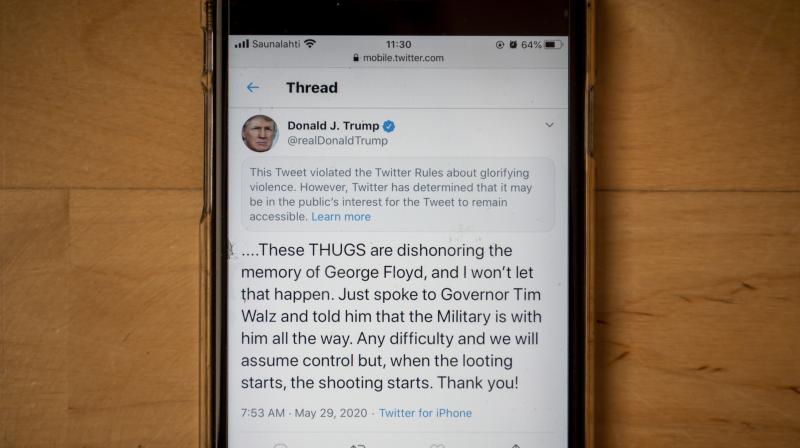 The twitter page of US President Donald Trump's is displayed on a mobile phone. (AFP)

The move came after Trump tweeted that "when the looting starts, the shooting starts" in reference to the ongoing unrest in Minneapolis following the death of George Floyd, a handcuffed African American man who pleaded for air as a white police officer kneeled on his neck.

"These thugs are dishonouring the memory of George Floyd, and I won't let that happen. Just spoke to Governor Tim Walz and told him that the Military is with him all the way. Any difficulty and we will assume control but, when the looting starts, the shooting starts. Thank you!" Trump tweeted.

Floyd was seen pinned down in a video by a white police officer and later died.

He could be heard screaming, "I can't breathe," on the video of the incident. The video of Floyd's death has now caused outrage in the city of Minneapolis and all over the country. Residents of the city have been protesting his death since Tuesday.

According to Twitter, it generally takes action on tweets that violate its rules.

"At present, we limit exceptions to one critical type of public-interest contentTweets from elected and government officialsgiven the significant public interest in knowing and being able to discuss their actions and statements," it said.

"As a result, in rare instances, we may choose to leave up a Tweet from an elected or government official that would otherwise be taken down," it said.

Trump, who has more than 80 million followers on Twitter, signed an executive order on Thursday aimed at stripping social media giants of legal immunity for the content posted by third-party users after Twitter added fact-check links to two of his tweets.

The executive order calls for new regulations, under Section 230 of the Communications Decency Act, to make it that social media companies that engage in censoring or any political conduct will not be able to keep their liability shield.

Twitter's latest move can further escalate tensions between the president and social media platforms, the US media commented.

President Trump, who is seeking a second term in November, has already threatened to shut down social media platforms.