World   Americas  29 May 2020  ‘Why Us?’ Protests over Floyd death spread beyond Minneapolis
World, Americas

‘Why Us?’ Protests over Floyd death spread beyond Minneapolis 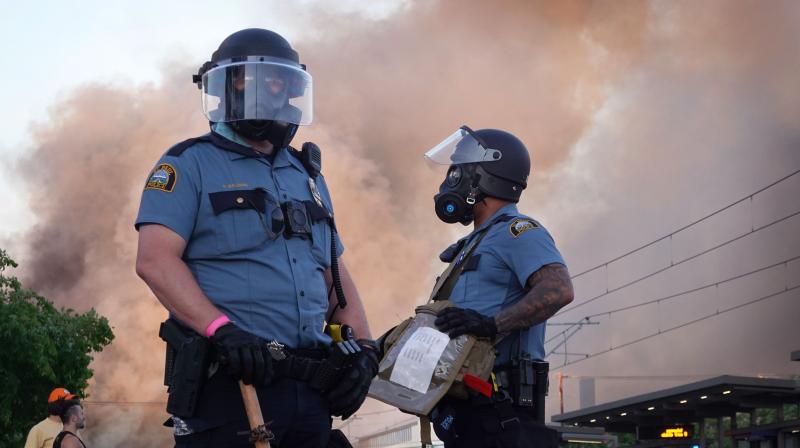 Police face off with protestors after several fires were started on May 28, 2020 in St. Paul, Minnesota. (AFP)

Minneapolis: Anger over the death of George Floyd, a handcuffed black man in police custody, spread beyond Minneapolis on Thursday, with looting and fires set along a major St. Paul street and protesters returning to a neighbourhood already ravaged by violent protest.

It was the third consecutive night of violent protests following Floyd’s death on Monday. In footage recorded by a bystander, Floyd can be seen pleading that he can’t breathe as Officer Derek Chauvin, who is white, kneels on his neck. As the minutes pass, Floyd slowly stops talking and moving.

Dozens of businesses across the Twin Cities were boarding up their windows and doors Thursday in an effort to prevent looting, with the Minneapolis-based Target announcing it was temporarily closing two dozen area stores. Minneapolis shut down nearly its entire light-rail system and all bus service through Sunday out of safety concerns.

Hundreds of demonstrators returned Thursday to the Minneapolis neighborhood at the center of the violence, where the nighttime scene veered between an angry protest and a street party. At one point, a band playing in a parking lot across from the police’s 3rd Precinct, the focus of the protests, broke into a punk version of Bob Marley’s “Redemption Song.” Nearby, demonstrators carried clothing mannequins from a looted Target and threw them onto a burning car. Later, a building fire erupted nearby.

Hennepin County Sheriff David Hutchinson said the rally had been peaceful and there had been no arrests by late evening.

The governor’s order did not say how many Guard members were mobilized or whether they would be in service Thursday night. After calling in the Guard, Walz urged widespread changes in the wake of Floyd’s death.