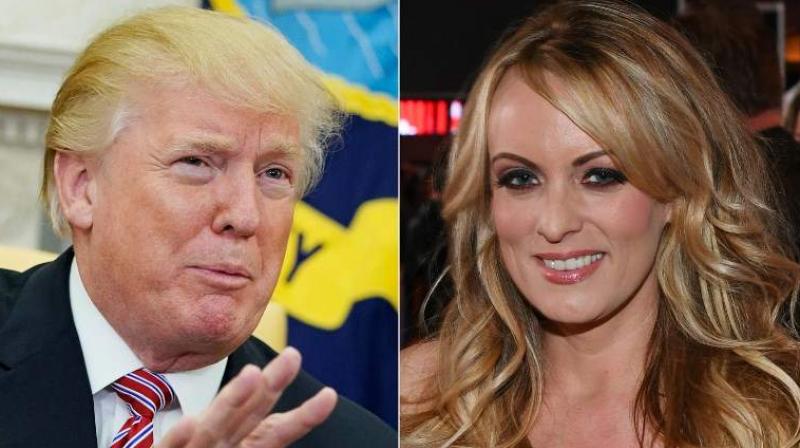 In a motion filed on Monday in Los Angeles federal court, Trump's lawyers also said that Daniels, who has said she had a sexual encounter with Trump in 2006 and was threatened to keep quiet about it. (Photo: AFP/File)

New York: Lawyers for US President Donald Trump have asked a federal judge to dismiss a defamation lawsuit by adult film actress Stormy Daniels, calling it an attempt to suppress the president's free speech.

In a motion filed on Monday in Los Angeles federal court, Trump's lawyers also said that Daniels, who has said she had a sexual encounter with Trump in 2006 and was threatened to keep quiet about it, had actually benefited from the attention brought by her dispute with the president.

Daniels' lawsuit, filed on April 30, centres on her account of being accosted by a man in a Las Vegas parking lot soon after she had agreed in May 2011 to talk about her alleged encounter with Trump to In Touch magazine.

Daniels, whose real name is Stephanie Clifford, has said the man told her to "leave Trump alone" and, after looking at her infant daughter, said: "That's a beautiful little girl. It'd be a shame if something happened to her mom."

On April 17, Avenatti released a composite sketch purporting to depict the man.

Trump, who has denied having an affair with Daniels, responded the next day on Twitter: "A sketch years later about a nonexistent man. A total con job, playing the Fake News Media for Fools (but they know it)!" Daniels said the tweet was defamatory.

In Monday's motion, Trump's lawyers said the lawsuit was "designed to chill the president's free speech rights on matters of public concern." They cited a law in Daniels' home state of Texas requiring that such a lawsuit be dismissed unless Daniels could provide "clear and specific evidence" for her claims, which they said she had failed to do.

They also said that Daniels had not been harmed, and had instead "capitalized" on the dispute with a nationwide tour of strip clubs "for which she admittedly is being paid at least four times her normal appearance fee."

The White House denied any wrongdoing by the president after the plea, and Trump said on Twitter that Cohen made up "stories" to get a deal with prosecutors.