Guterres, recounting his experience of visiting camps this past July, said that he heard stories of horrendous persecution and suffering. 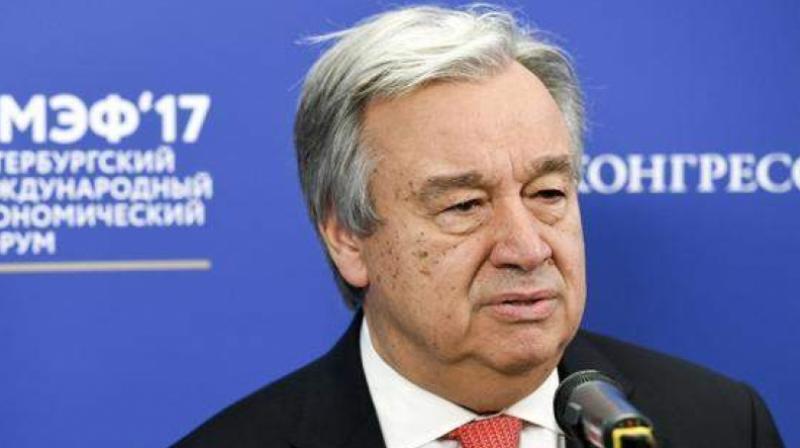 'It is clear that conditions are not yet met for the safe, voluntary, dignified and sustainable return of Rohingya refugees to their places of origin or choice,' Guterres added. (Photo: AP)

United Nations: Conditions are still not suitable for the safe, voluntary and sustainable return of over 700,000 Rohingya refugees to their homes in Myanmar, UN chief Antonio Guterres has said as he called for accountability for the "horrendous persecution" of the minority community in the country.

The Secretary-General was briefing the Security Council on the situation in Myanmar, where 12 months ago a military operation in northern Rakhine state sparked an exodus of desperate Rohingya refugees to Bangladesh that quickly became one of the world's worst humanitarian and human rights crises.

Guterres' remarks also follow the release of an independent UN investigation into alleged human rights abuses carried out against the mainly Muslim Rohingya and which called for the country's military leaders to be investigated and prosecuted for genocide and war crimes.

"Following my direct engagement with the Myanmar authorities and several initiatives on the ground by the UN system, I expressed my concerns regarding the dramatic humanitarian and human rights situations," he said.

"And I emphasized the risks to regional peace and security of further degeneration. As you know, I have also been working to advance a policy of engagement and unified action to encourage positive actions by the Government, help defuse tensions between communities and build confidence and trust. I do not yet see the needed commitment for that investment to take place," he said.

"It is clear that conditions are not yet met for the safe, voluntary, dignified and sustainable return of Rohingya refugees to their places of origin or choice," Guterres added.

Cate Blanchett, the Academy Award winning actor and Goodwill Ambassador for the Office of the UN High Commission for Refugees (UNHCR), and Tegegnework Gettu, Associate Administrator of the UN Development Programme (UNDP) also addressed the briefing, which was chaired by Lord Ahmad, Minister of State for the Commonwealth and the UN for the United Kingdom, which currently holds the presidency of the Security Council.

Over 700,000 Rohingya fled Myanmar to ramshackle refugee camps in neighbouring Bangladesh's Cox's Bazar area, Bangladesh after being forced from their homes by a military operation which UN human rights chief Zeid Ra'ad al Hussein compared, at the time, to ethnic cleansing.

Guterres, recounting his experience of visiting the camps this past July, said that he had heard stories of horrendous persecution and suffering.

The trigger for the military crackdown one year ago was a series of attacks on Myanmar security forces by insurgents that were immediately condemned by the Secretary-General.

Guterres said that the disproportionate use of force against civilian populations and the gross human rights violations that followed, could never be justified.

Since then, despite his direct engagement with the Myanmar authorities, and the launch of several UN system initiatives on the ground, the Secretary General has expressed concern regarding the dramatic humanitarian and human rights situations, as well as the risks to regional peace and security of further degeneration.

This engagement includes the advancement of a policy of engagement and unified action to defuse tensions and build trust, and the appointment of Christine Schraner as Special Envoy on Myanmar, which has led to a process of broad consultations with the Government, military, civil society and women's groups.

Guterres said that, despite the signing of a Memorandum of Understanding (MOU) by the Myanmar authorities and UN agencies in June, the country's leaders have not made the investment in reconstruction, reconciliation and respect for human rights necessary for all communities to live improved and resilient lives in Rakhine state.

UNDP's Gettu said the agency shares international concerns about the situation in Rakhine and the plight of the Rohingya, and he emphasised the need to address Rakhine's significant development challenges and to lift restrictions on free movement and access to services.

The UNDP, UNHCR and other UN agencies have been implementing the MOU and working in Rakhine to put a wide-ranging development and humanitarian assistance initiative in place with support from major donors.

He underlined that addressing the needs of the refugees in Cox's Bazaar, Bangladesh, is also of primary importance.

Guterres asked the Security Council to urge Myanmar's leaders to ensure immediate, unimpeded and effective access for the Organisation's agencies and partners, and release journalists arrested for reporting on the human tragedy.

He added that there can be no excuse for delaying the search for dignified solutions that will allow people to return home, and benefit from freedom of movement, an end to discrimination and the re-establishment of the rule of law.

His call for action was amplified by Blanchett, who said that "the focus of all our efforts must be to provide much-needed support inside Bangladesh while working to ensure conditions in Myanmar are conducive to return."

Guterres concluded with a call for accountability as an essential prerequisite for regional security and stability, and for the Security Council to give serious consideration to the report released on Monday by the UN-appointed Independent International Fact-finding Mission on Myanmar.

He added that effective, international cooperation will be "critical to ensuring that accountability mechanisms are credible, transparent, impartial, independent and comply with Myanmar's obligations under international law."