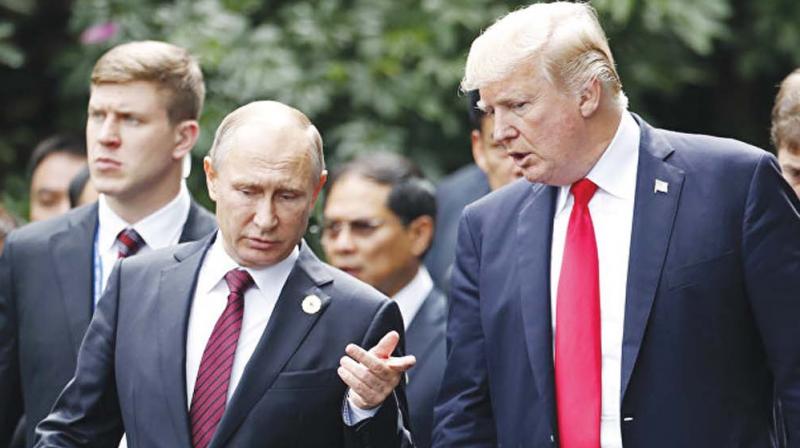 While Russian President Vladimir Putin skipped this year's UN gathering, Lavrov has made sure Russia's voice was heard, holding more than 20 meetings with world leaders and top diplomats this week. (Photo: File)

United Nations: Russia's foreign minister trashed accusations of Russian meddling abroad as "baseless" and used the podium at the UN's biggest event to tear into US policies in Iran, Syria and Venezuela. He later declared that US-Russian relations "are bad and probably at their all-time low."

In a rapid-fire, unforgiving speech Friday, Sergey Lavrov pounded away at "self-serving" unilateral moves by US President Donald Trump, and assailed crippling Western sanctions against Russia as "political blackmail."

Lavrov deflected accusations of Russian interference in the 2016 US presidential election, a nerve agent attack in Britain and other meddling abroad — despite mounting evidence of a broad, coordinated influence campaign. He criticized "baseless accusations of interference in the internal affairs of certain countries" and turned it around against the West, accusing unnamed forces of "overt endeavours to undermine democratically elected governments," in an apparent reference to US and EU support for Russia's neighbours and the Syrian opposition.

Lavrov defended the United Nations — where Russia holds veto power on the Security Council — as the only legitimate place to resolve international issues and disputes.

At a news conference later, he said US President Donald Trump and Russian President Vladimir Putin held "quite constructive" meetings in Germany and Finland, but those responsible for implementing the agreements that were reached "are in no hurry to do that."

Lavrov also cited the absence of any US-Russia talks on important issues including counter-terrorism, cyber-security, strategic stability and major arms control agreements. "The time for the negotiations is ripe, or I would say overripe," he said.

"The dialogue right now is in limbo."

In his speech, Lavrov was particularly angry over US and EU sanctions over Russia's actions abroad, saying, "We see the desire of several Western nations to preserve their self-proclaimed status as world leaders ... and do not hesitate to use any methods including political blackmail, economic pressure and brute force."

He defended the 2015 deal aimed at curbing Iran's nuclear program, and said "we will do everything possible" to preserve it. Lavrov called Trump's decision to pull out of the deal part of a dangerous trend of unilateral measures that risk damaging the post-World War II world order.

Lavrov lobbied for strengthening the United Nations instead of the go-it-alone doctrine that Trump laid out in his General Assembly speech earlier this week, slamming the UN's central tenet of multilateralism from inside its halls. Russia is framing itself as a counterweight to US power around the world, and Lavrov has been maneuvering in talks at the UN this week to shape the future of Syria, influence nonproliferation negotiations with North Korea and bolster Venezuela's embattled president.

Lavrov met Friday with Syrian Foreign Minister Walid al-Moallem at the UN Russia is rebuilding trade and military ties with Syria as it looks to a postwar future.

While tensions linger over the last rebel stronghold of Idlib, Russia is determined to keep Syria solidly anchored in its sphere of influence over the long term, as a foothold in the Middle East and as a warning to the U.S. and its allies against future interference. Russia's relations with the US are at a post-Cold War low, and many Russian policies are directly aimed at countering American influence.

While Russian President Vladimir Putin skipped this year's UN gathering, Lavrov has made sure Russia's voice was heard, holding more than 20 meetings with world leaders and top diplomats this week. Among them: the presidents of Venezuela, Iran and Turkey, the chiefs of NATO, the UN and EU, and North Korea's foreign minister.