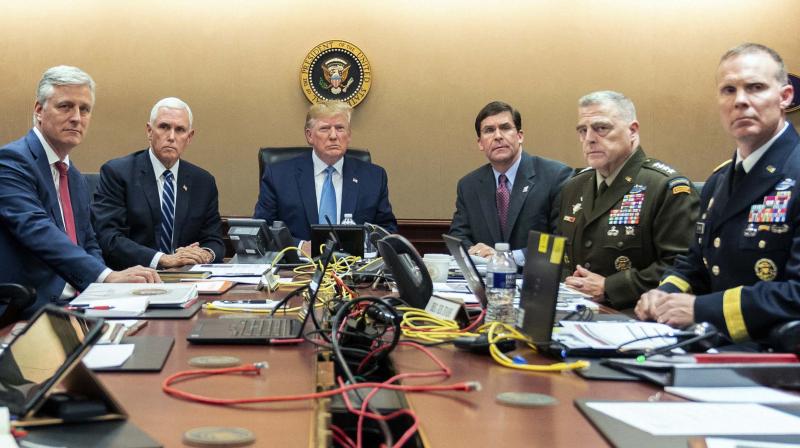 In this photo, President Donald Trump is joined by his team in the Situation Room of the White House in Washington. (Photo: AP)

Here is a description of the raid according to Trump, who went into unusual detail during a national address broadcast from the White House.

The United States began to receive intelligence on the whereabouts of Baghdadi around a month ago, including some “helpful” information from the Kurds, said Trump.

US intelligence officials were able to “scope out” his exact location two weeks ago, while Trump himself became aware of the planned raid three days ago.

As part of the plan, the US had to secure permission from Russia, Iraq and Turkey to fly over their airspace, according to Trump and National Security Adviser Robert O’Brien.

Trump said the White House did not disclose the nature of the operation to Russia, but told Russian officials they would “like” it.

Trump gathered in the White House Situation Room with vice-president Mike Pence, defense secretary Mark Esper, national security adviser Robert O’Brien, and other intelligence officials. They watched the raid unfold live “as if you were watching a movie,” said Trump.

Moments after they gathered, US military personnel and military dogs lifted off in eight helicopters from an unidentified military base in the Middle East, according to Trump.

The personnel came from the Delta Force, one of the US special units mainly focused on counter-terrorism and often deployed to capture high-value targets. A US official said the operation was staged from an airbase in western Iraq. Esper said that US forces called for Baghdadi to surrender but the world's most wanted man refused.

Meanwhile, the Washin-gton Post came in for heavy criticism for their obituary headline covering al-Baghdadi killing. There was huge uproar in the social media  over the title — “Abu Bakr al-Baghdadi, austere religious scholar at helm of Islamic State, dies at 48.” Netizens slammed the paper for overlooking the fact that the ISIS chief was a dreaded terrorist. The paper later changed the title.