‘We know we made mistakes,’ says Boeing CEO on 737 MAX plane

Earlier this month, the FAA questioned why Boeing withheld instant messages from a former pilot for months that raised questions about MCAS. 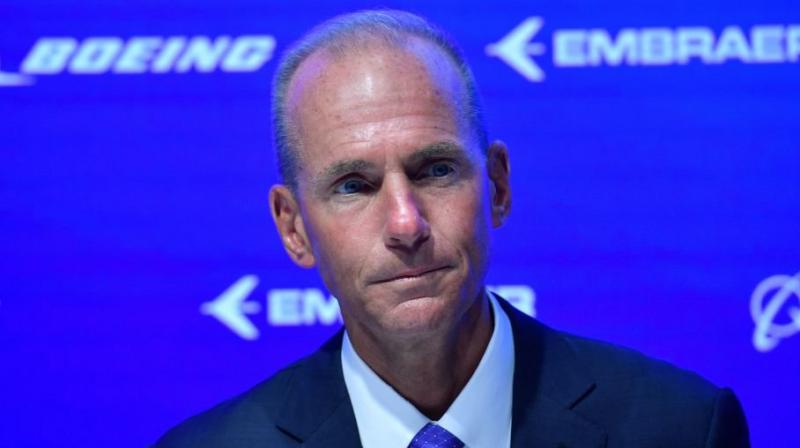 Boeing Co Chief Executive Dennis Muilenburg will acknowledge on Tuesday that the aircraft manufacturer made mistakes, as he appears at a congressional hearing on two 737 MAX crashes that killed 346 people, according to written testimony made public on Monday. (Photo: AFP)

Washington: Boeing Co Chief Executive Dennis Muilenburg will acknowledge on Tuesday that the aircraft manufacturer made mistakes, as he appears at a congressional hearing on two 737 MAX crashes that killed 346 people, according to written testimony made public on Monday.

"We have learned and are still learning from these accidents, Mr Chairman. We know we made mistakes and got some things wrong," Muilenburg will tell the US Senate Commerce Committee.

The testimony, which was first reported by Reuters and made public later on Monday, added that the company had made improvements to the now-grounded MAX 737 airplane "that will ensure that accidents like these never happen again."

Muilenburg, who was stripped of his title as Boeing chairman by the board earlier this month, will also testify before the US House of Representatives Transportation and Infrastructure Committee on Wednesday.

US airlines have canceled flights into January and February because of the grounding and the Federal Aviation Administration is not expected to approve the 737 MAX's ungrounding until December at the earliest.

"We also know we can and must do better," Muilenburg's testimony says. It also expresses "deepest sympathies to the families and loved ones" of those killed, noting the hearing would be taking place on the anniversary of the crash of Lion Air Flight 610 in Indonesia that killed 189 people. He added that when the 737 MAX returns, "it will be one of the safest airplanes ever to fly."

In March, after a 737 MAX crash of Ethiopian Airlines 302 killed 157 people, the plane was grounded worldwide.

Senate Commerce Committee Chairman Roger Wicker told Reuters last week that the 737 MAX "won't fly unless 99.9 per cent of the American public and American policymakers are convinced that it's absolutely safe."

Indonesian investigators reported on Friday that Boeing acting without adequate oversight from U.S. regulators, failed to grasp risks in the design of cockpit software on its 737 MAX airliner, sowing the seeds for Lion Air 610 that also involved errors by airline workers and crew.

Muilenburg noted that both crashes involved the repeated activation of a flight control software function known as MCAS after it got faulty sensor input.

Boeing's development of that software has come under criticism in reports and from lawmakers and the company is adding significant safeguards to the system. Muilenburg said the changes would "eliminate the possibility of even extremely unlikely risks that are unrelated to the accident."

Boeing has admitted few mistakes since the two fatal crashes. Earlier this month, the FAA questioned why Boeing withheld instant messages from a former pilot for months that raised questions about MCAS.

In May, Boeing acknowledged it did not tell the FAA for 13 months that it inadvertently made an alarm alerting pilots to a mismatch of flight data optional on the 737 MAX, instead of standard as on earlier 737s. The company insisted the missing display represented no safety risk.

Muilenburg acknowledged that getting the plane in the air "has taken longer than we originally expected, but we're committed to getting it right, and return-to-service timing is completely dependent on answering each and every question from the FAA."

He added that "regulators should approve the return of the MAX to the skies only after they have applied the most rigorous scrutiny, and are completely satisfied as to the plane's safety. The flying public deserves nothing less."

US Representative Peter DeFazio, who chairs the House panel, has one main question for Boeing at Wednesday's hearing: "How the hell did this happen?"