She also wore a full-body outfit called a burkini during the swimsuit competition. 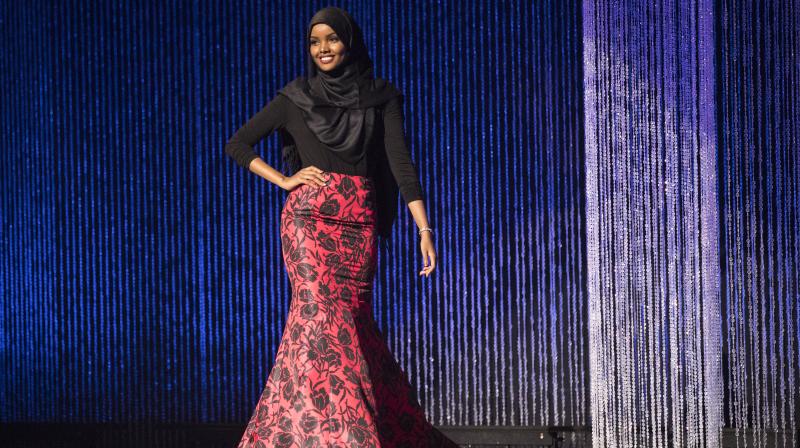 Halima Aden wears a hijab and gown while competing in the preliminary round of the Miss Minnesota USA pageant at the Ames Center in Burnsville on Saturday. (Photo: AP)

Burnsville (Minnesota): A Muslim woman has become the first to compete in the Miss Minnesota USA pageant while fully clothed.

Halima Aden made the semifinals of the competition over the weekend while wearing a hijab, but did not advance to the finals. She also wore a full-body outfit called a burkini during the swimsuit competition.

The Minneapolis Star-Tribune reports Ms Aden’s swim outfit stood in contrast to those of the other 44 contestants, most of whom wore bikinis. Before the competition, the 19-year-old Somali-American woman told Minnesota Public Radio News that the pageant was “a great platform to show the world who I am.”

“For a really long time I thought being different was a negative thing. But as I grew older, I started to realize we are all born to stand out, nobody is born to blend in,” Ms Aden told the CBS Minnesota. “How boring would this world be if everyone was the same?” Meridith Gould of Minneapolis was crowned Miss Minnesota. She will go on to compete in the Miss USA pageant in 2017.

Born in a Kenyan refugee camp, Ms Aden moved to Minnesota — home to one of the largest Somali communities in America — when she was just six years old. Growing up, she said she saw very few positive representations of Muslim women.

“As long as I could remember, the media portrays Muslim women as oppressed and in a very negative light,” she said.

“But you never see the beauty and the good things that come from Muslim women,” Ms Aden had told reporters earlier.