Tickets for the prime-time speech went out on Monday and it was apparently the first time anyone picked up a glaring error. 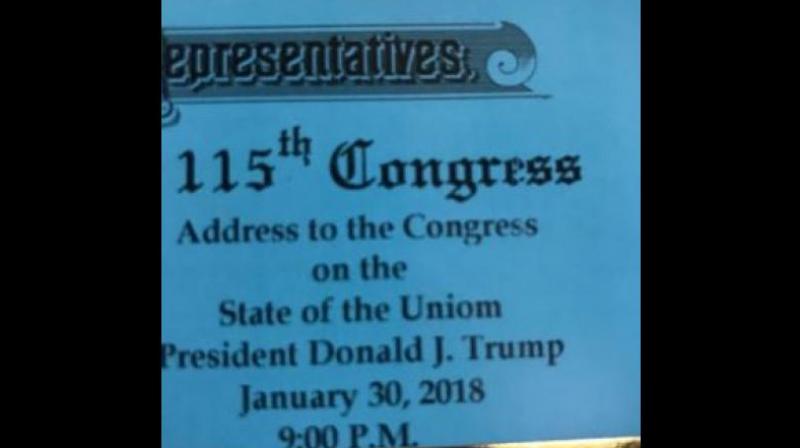 The printing is overseen by the Sergeant at Arms of the US House of Representatives, whose office on Monday acknowledged the mistake. (Photo: Twitter | @RepRaulGrijalva)

Washington: Donald Trump has been left red-faced yet again with another typo - this time on the tickets to his “State of the Uniom” speech.

Tickets for the prime-time speech went out on Monday and it was apparently the first time anyone picked up a glaring error.

Just received my ticket for the State of the Union. Looks like @BetsyDeVosEd was in charge of spell checking... #SOTUniom pic.twitter.com/ZgFTGtTkzv

While politicians couldn’t help making a few jokes at the expense of the president - whose misspellings, particularly his “covfefe” tweet have become legendary - the White House is apparently not responsible for the error.

The printing is overseen by the Sergeant at Arms of the US House of Representatives, whose office on Monday acknowledged the mistake.

“There was a misprint on the ticket,” a Sergeant at Arms spokesman told AFP.

“It was corrected immediately, and our office is redistributing the tickets.” But not before a few politicians seized on it.

On the spelling front, Trump has been a presidential trailblazer. He has routinely posted tweets containing errors, including one on the day after his January 20, 2017 inauguration, in which he wrote he was “homered to serve” as the nation’s 45th president.

His first State of the Union address on Tuesday will be the biggest test yet of his ability to not just deliver a stately speech but also to then stay on track as the White House rolls out policies building on it.

The speech is a big set piece for any president, a chance to showcase the accomplishments of the past year while setting the tone for the next one.

The White House has spent weeks crafting the State of the Union speech, seeking input from Cabinet heads and agency leaders.

Led by policy adviser Stephen Miller and staff secretary Rob Porter, the speech has gone through a number of drafts that have circulated throughout the West Wing, and the president has added input with handwritten notes.

Trump is expected to highlight immigration and national security issues, outline his hopes for new trade deals and reveal some of his long-awaited infrastructure plans. He then could, as his predecessors did, spend some time travelling the country in support of those ideas.

Tags: donald trump, state of the union, us house of representatives