The scandal has dominated headlines in Britain for days and has sparked intense criticism of Conservative govt's tough immigration policies. 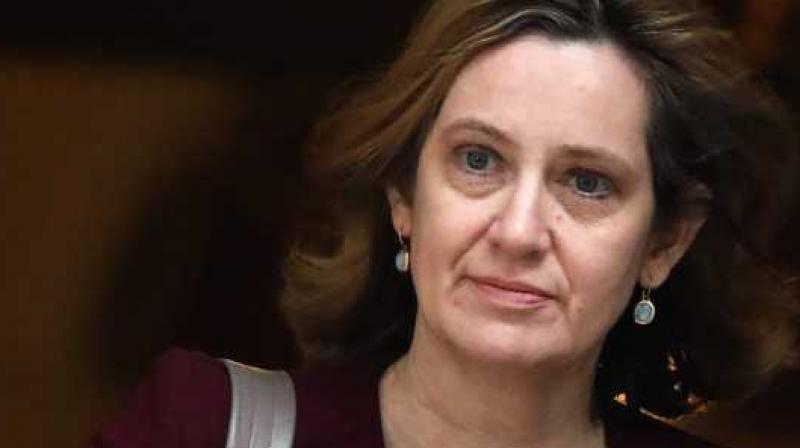 Rudd, who faced calls to step down from the opposition Labour Party, telephoned May to inform her of her decision to resign. (Photo: AP)

London: Britain's Home Secretary Amber Rudd resigned on Sunday as pressure mounted on her to quit the cabinet post amid a scandal over authorities' mistreatment of long-term UK residents wrongly labelled as illegal immigrants.

Rudd, who was due to make a House of Commons statement later in the day, had been under increasing pressure to quit over the scandal involving Caribbean immigrants who were brought to the UK from the so-called "Windrush generation" from the 1940s.

She had faced criticism over the existence of UK Home Office deportation targets and her knowledge of them.

"The prime minister [Theresa May] has tonight accepted the resignation of the Home Secretary," a Downing Street spokesperson said.

Rudd, who faced calls to step down from the opposition Labour Party, telephoned May to inform her of her decision to resign.

Rudd had been under pressure to explain apparent discrepancies between her evidence to the Parliament's Home Affairs Select Committee last week denying any knowledge of deportation targets for illegal migrants in the UK Home Office headed by her and a memo leaked to the media that linked her to such targets.

The furor has grown since The Guardian reported that some people who came to the UK from the Caribbean in the decades after World War II had recently been refused medical care in Britain or threatened with deportation because they could not produce paperwork proving their right to reside in the country.

Those affected belong to the Windrush generation, named for the ship Empire Windrush, which in 1948 brought hundreds of Caribbean immigrants to Britain to help it rebuild after the devastation of World War II.

In recent weeks Rudd and May have apologised repeatedly to the Windrush generation, saying all pre-1973 Commonwealth immigrants who don't already have British citizenship will get it, and those affected will get compensation.